(CNN) -- Trying to establish herself in the minds of voters as the more experienced candidate and facing a shrinking lead in New Hampshire, Sen. Hillary Clinton took a sharp dig Tuesday at her closest Democratic rival, Sen. Barack Obama. 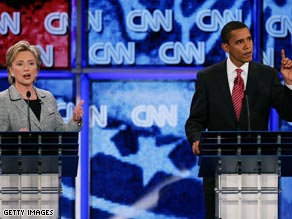 Clinton zeroed in on Obama's remark that his "strongest" foreign policy experience came from living in Indonesia as a child.

"Now voters will judge whether living in a foreign country at the age of 10 prepares one to face the big, complex international challenges the next president will face," Clinton said in a speech to an audience in Iowa.

"I think we need a president with more experience than that -- someone the rest of the world knows, looks up to and has confidence in."

Clinton also said she had "traveled the world on behalf of our country -- first in the White House with my husband and now as a senator. I've met with countless world leaders and know many of them personally."

Clinton's verbal broadside came a day after Obama told an audience in Iowa that his four years in Southeast Asia, and the fact that his father was from Kenya, gave him the knowledge "of how ordinary people in these other countries live."

Watch a report on the Democratic race getting ugly »

Clinton's jab also came as the senator from New York saw a 23-point lead over Obama in September fall to 14 points in a new CNN/WMUR New Hampshire presidential primary poll conducted by the University of New Hampshire.

In Iowa, 30 percent of those questioned in an ABC/Washington Post poll supported Obama. Clinton was at 26 percent, former Sen. John Edwards at 22 percent and New Mexico Gov. Bill Richardson at 11 percent.

The Iowa caucuses, which will be held January 3, kick off the presidential primary season.

New Hampshire traditionally goes second. The primary is expected to take place January 8, although the date is not set.

One reason for Clinton's shrinking lead may be voter perceptions of her as a candidate.

Thirteen percent of those polled in New Hampshire said Clinton is the candidate who is most honest and trustworthy, and 27 percent said Obama is. Clinton also trails Edwards and Richardson in that category.

Responding to Clinton's criticism during a stop in New Hampshire on Tuesday, Obama said the point he was making was that his time overseas gave him "some judgment and perspective around what other people think about America and how they might react or respond when we make some of the decisions that we make."

The senator from Illinois then proceeded to take his own dig at Clinton over her comment that she has met many world leaders.

"I was wondering which world leader told her that we needed to invade Iraq, because that is the conventional thinking that we're going to have to break," he said.

Edwards' campaign also inserted itself into the fray over Clinton's comments about Obama, accusing her of mud-slinging.

"Now we know what Sen. Clinton meant when she talked about 'throwing mud' in the last debate," said Edwards spokesman Chris Kofinis.

"Like so many other things, when it comes to mud, Hillary Clinton says one thing and throws another."

But Edwards himself said he's paid no attention to the "sniping."

"Can I honestly tell you ... I spend not a nanosecond listening to what each of them are saying sniping toward each other, so I have no idea what you're talking about," he said.

After a brief rundown given by reporters on the day's back and forth between the two, Edwards continued, "I don't want any part of any of that. I think Sen. Obama is completely entitled to talk about his whole life experience to allow people to judge whether he's prepared to be president." E-mail to a friend