Lord of the dance

(CNN) -- Not only is Tetsuya Kumakawa the greatest ever Japanese ballet dancer, he is one of the best the world has ever seen. His athletic grace has won him fans wherever he has performed, and his dedication to the art continues to bring ballet to new audiences. 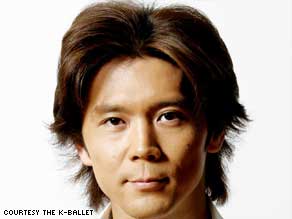 Capable of soaring leaps and flawless turns, Tetsuya "Teddy" Kumakawa has thrilled audiences the world over. Founded in 1998, his K-Ballet company has built on the success he acheived at the Royal Ballet in Covent Garden, London.

Born in Sapporo on Hokkaido -- Japan's North Island -- in 1972, Kumakawa took up ballet after seeing his eight year-old cousin, Hironao perform at school in Sapporo.

Like any 10 year old boy, his new hobby had to compete with other activities -- he also enjoyed kendo, baseball and drawing -- but it was ballet that he really fell in love with.

From a young age Kumakawa had been keen to see the world and the arrival of foreign guest tutors at his school only reinforced those desires.

But it was Swiss ballet teacher Hans Meister's visit to Hokkaido that proved to be a turning point in Kumakawa's nascent career. Meister encouraged him to travel and recommended that he attend the Royal Ballet School (RBS) in London or the Canadian National Ballet School.

Kumakawa was just 15 years old when he left home to take up a place at the RBS. Less than two years later, in January 1989, he won both the Gold Medal and the newly established Prince Takamado Prize at the prestigious Prix de Lausanne in Switzerland. He was without question the star of the competition, producing soaring leaps in a performance from 'Don Quixote'.

In the spring of 1989 he turned professional, becoming the first Asian dancer to join the Royal Ballet Company (RBC) -- his first solo part was the leading mandolin player in "Romeo and Juliet." In June he won the Classical Ballet Prize at the Eurovision Young Dancer of the Year competition held in Paris.

Kumakawa experienced a meteoric rise through the ranks of the RBC. He quickly became a Soloist, dancing the Act 1 pas de trois in Tchaikovsky's 'Swan Lake' and completed a memorable performance as the Bronze Idol in La Bayadère -- a cameo role that showcased his extraordinary jumping ability.

The following season he was chosen for the role of the Fool in the premiere of Kenneth Macmillan's 'The Prince and the Pagodas'. In 1991 he was promoted to First Soloist and was a Principal dancer by 1993.

So developed a mutual love affair between Kumakawa, his new fans and his adoptive city. "I was so pleased to participate in British culture," he told The Japan Times in 2004.

By the age of 26 'Teddy', as he had become known to his friends in the UK -- 'kuma' means 'bear' in Japanese -- had danced the full repertoire of classical and modern roles at the RBC.

The man who had wowed London audiences with his acrobatic jumps and audacious turns was about to leap into a new chapter of his life.

In 1998 he left the Royal Ballet to found his own company -- the K-Ballet -- back home in Tokyo. It was a highly controversial move at the time. Not only had he upped sticks in the middle of a season, he also took five of the Royal Ballet's star male performers with him to Japan. The British Press and the ballet fraternity were not impressed.

Greeted as a returning hero in his native country, Kumakawa took on the roles of leading dancer, teacher, artistic director and company manager simultaneously. But despite the formidable workload and responsibility the new K-Ballet flourished, fostering a wider interest in Japanese ballet.

In 2004, Kumakawa established the K-Ballet School. The same year, the K-Ballet became the first Japanese ballet company to perform at the Metropolitan Opera House in New York.

A career-threatening knee injury, suffered whilst on a K-Ballet tour of Japan in May 2007 has temporarily sidelined Kumakawa from performing. But he expects to be back on stage next year, delighting audiences with virtuoso performances once again.

In the meantime, Kumakawa -- who continues to enjoy pop star status in Japan -- continues to pass on his expertise to a new generation of dancers.