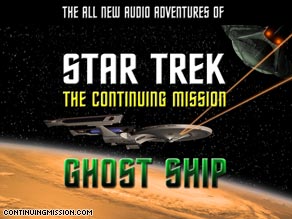 A Web-based "Star Trek" podcast tells the "continuing mission" of the USS Montana.

Television seems to have abandoned the 40-year-old franchise for now, leaving fans to create adventures using the Web, high technology and their imaginations.

"People are hungry for new material," said Sebastian Prooth, co-executive producer of "Star Trek: The Continuing Mission." "But they're not hungry for McDonald's. They're hungry for gourmet."

Interactive: A history of "Star Trek" »

Prooth and co-executive producer Andy Tyrer plan to serve up their pilot episode "Ghost Ship" on Christmas Day, after 10 weeks of painstaking production via the Internet from the UK and five U.S. states.

Tyrer comes to the project after producing "WhoUniverse," a podcast about the long-running BBC TV series "Doctor Who," and Prooth after working on the technology podcast "Global Geek."

"The Continuing Mission" centers on the adventures of the USS Montana, a starship similar to Kirk's famous USS Enterprise of the original 1960s TV series.

Commanded by Capt. Paul Edwards, the Montana is accidentally thrust from the 23rd century into the 24th century, about five years before the time of TV's "Star Trek: The Next Generation," which debuted in 1987.

During the coming year, Prooth and Tyrer plan to produce and post on their Web site 10 half-hour episodes.

"When we committed to this, we made the decision that we were going to treat this like a proper production," said Tyrer from his home in England.

"Every time an actor records his lines, Sebastian is on the Skype [audio Web link] with them, giving them directions about how he wants the scene to be played out," said Tyrer.

Despite Prooth's distractions from his day job at a printing shop and Tyrer's gig as an IT consultant, they've produced a slick, professional-quality drama in a genre that's threatening to give mainstream TV studios a run for their money.

"I think it shows what can be done on a limited budget on the Internet," said "Battlestar Galactica" producer/writer Ronald D. Moore. "The bar to distribution is much lower than it was in the past. People can, on their own, start doing programming out there that is of a quality that approaches what we can do on air -- not maybe at the moment, but if you compare those 'New Voyages' episodes to the original series, they're in the ballpark with what the original series was able to do."

The award for "New Voyages" is evidence that "Star Trek" fans have traveled light years from their days at 1970s conventions, where they traded handwritten novellas and rough-hewn screenplays based on the original NBC TV series. Three decades later, they're producing feature-length dramas complete with "Star-Wars"-style special effects.

Franchise owner CBS/Paramount has traditionally turned a blind eye to these projects as long as they remain nonprofit and don't harm copyrighted material.

"I think it'll spur competition. They're already aware that they're in a fight for attention -- for eyeballs out there," said Moore. "They're going to have to continue to supply a product that surpasses that of what startup companies, or people, can do on their own dime."

But don't expect fan-produced Webisodes to be threatening Hollywood studios anytime soon, said Robert Thompson of Syracuse University's Center for Television and Popular Culture. He predicts the Web will become a place for entertainment development.

"The Internet is one great big farm team... offering the opportunity for people to make stuff ... put it out there ... and allow some of it to rise to the top," Thompson said. "Then, the best stuff will be co-opted or bought -- and the people will be hired and move into the mainstream area."

Last year, creators of the fictional video blogger lonelygirl15 won a Web deal after attracting fame online. In 2008, NBC reportedly will begin airing "Quarterlife," popular Webisodes of which debuted online. It was created by the producers of TV's "thirtysomething."

Royalties for Webisodes are at the heart of the ongoing Hollywood writers' strike, but Thompson said the television industry shouldn't be too distracted by what's available online.

"Television needs to do what made them appealing in the first place, which is good, professional storytelling," said Thompson. "What television should be creating now are the next 'Star Trek' franchises -- not 'Star Trek' per se -- but the shows that Webisodes in five or 10 years will be based on."

All About Science Fiction • Television