The greatest runner of them all

(CNN) -- Some athletes earn the right to be considered a sporting legend. Few, in truth, are truly deserving of such an honor. But there can be no quarrel over the greatness of Ethiopia's Haile Gebrselassie who, in a career spanning 16 years, has redefined the art of long-distance running. 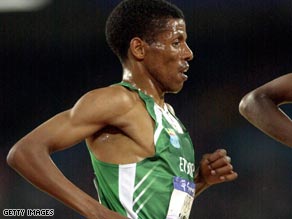 Haile Gebrselassie during the epic 10,000 meter final at the Sydney Olympics in 2000. It is regularly described as one of the greatest track races of all time.

Born in the rural town of Asela in the central province of Arsi, Haile Gebrselassie was seven years old when the Ethiopian Miruts Yifter triumphed in the 10,000 meters final at the 1980 Moscow Olympics.

Listening to the victory on the family radio the feat implanted not only a desire to run, but also a belief that it was possible for Ethiopian athletes to succeed at the highest level.

Gebrselassie soon took up running. Poor transport services in Ethiopia necessitated that he regularly run 10 kilometers to school and back with his books tucked under his left arm.

When he began to run competitively -- he won his first 1500 meter race at primary school when he was eight years old -- he ran with a crooked arm, as if the books were still there. But the bent arm didn't hinder him and it has remained a distinctive feature of his running style ever since.

Spurred on by his physical education teacher, Gebrselassie started training after school. Extra sessions running around his father's farm soon reaped rewards as he began to win not only local but regional races. When he was 15 years old, he and his brother joined an athletics club in Addis Ababa and tried to make the national team.

The young Gebrselassie's devotion to running initially annoyed his father, who implored his son to forge a career as a doctor or a teacher, but he kept up his training schedule and the more he practiced, the faster he got.

In 1992, the same year he met his future wife Alem, a 19 year-old Gebrselassie won the 5,000 and 10,000 meter finals at the World Junior Athletic Championships. The following season his senior career would take off in spectacular fashion.

At the World Athletics Championships in Stuttgart, Germany he claimed the 10,000 meter title. The following year he broke his first world record -- 5,000 meters at a meet in Hengelo, Holland -- surpassing the time set by the Moroccan Said Aouita seven years earlier.

1995 produced further extraordinary success. Not only did Gebrselassie retain his World 10,000 meter crown -- he would eventually win four -- but he clocked three world records in just 71 days.

Still only 23 years old, his fledgling career reached its pinnacle when he won the 10,000 meter Olympic gold at Atlanta in 1996. In doing so, Gebrselassie had emulated his boyhood hero Miruts Yifter.

The next four years saw Gebrselassie go unbeaten over 5,000 and 10,000 meters, smash records indoors and out -- taking his career world record tally to 15 -- and star in the 1999 Disney movie "Endurance" which chronicled his life.

His triumph over his great rival, Kenyan Paul Tergat at the Sydney Olympics in 2000 is perhaps his most famous race. Gebrselassie -- who had spent the weeks prior to the games struggling with an Achilles tendon injury -- piped Tergat on the line by 0.09 seconds to retain his 10,000 meter Olympic title in dramatic fashion.

The victory secured him national hero status at home in Ethiopia, and hundreds of thousands of fans cheered him through the streets of Addis Ababa in a homecoming parade.

His attempts to win an unprecedented third Olympic title in Athens in 2004 were dashed by a recurrence of the Achilles tendon injury. Any sense of personal disappointment -- it is difficult to tell as Gebrselassie has always worn a smile in triumph or defeat -- was replaced with elation as his protégé and countryman Kenenisa Bekele took the gold medal. The previous year Gebrselassie had finished runner-up to Bekele in the World Championship 10,000 meters in Paris.

Now 34 years old, his body shows no signs of fatigue -- physical or mental -- and he retains a hunger to achieve. Whatever happens in the future, his performances merit a permanent place in the pantheon of truly great sportsmen.

Off the track, Gebrselassie has maintained his links with Ethiopia, choosing to live and work in Addis Ababa. He remains committed to promoting the Ethiopian cause, not always through charity -- although he lends his vigorous support to numerous projects -- but by repeating the mantra of reward through hard work. There can be few better role models for sport and life than he.