LONDON, England (CNN) -- Looking from the balcony of his 83rd story penthouse, the young executive scans the sky ahead, the keys to his new Porsche itching in his hand. Stepping into his garage he opens the driver's door, sits inside, flicks on the ignition and listens as the four turbofans blast into life. Disengaging the skybrake, his Porsche hovers effortlessly, mere inches above the ground, before he floors the gas pedal and launches powerfully into the crimson sky. 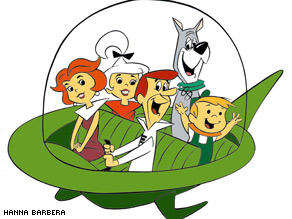 Room for all the family: George Jetson effortlessly pilots his flying car

The science fiction future, as imagined by children growing up between the 1950s and 1980s is already here: we have the flat panel televisions mounted on the wall like canvases, we have the Dick Tracy personal communication devices (and we've managed to cram jukeboxes inside them -- we call them iPhones) but we're missing something. Popular Science, the magazine that has fed our technological fantasies for generations, put it best when it asked, in March 2006: "Where's My Flying Car?".

While it's still not possible to walk into your local Chevy dealer and fly out with a vertical take-off and landing (VTOL) Camaro that drives through all three dimensions, there are engineers across the world dedicating their lives to making the dream possible. But a Jetsons-style flying car that can be piloted as easily as a family sedan still seems a long way off.

One company that has been pursuing the flying car dream -- for more than four decades -- is Moller of Davis, California. In August 2007 its CEO, Paul Moller, announced that the company is due to offer for sale a flying car -- of a sort -- with a price tag between $95,000 and $145,000 depending on options.

The Moller M200G Volantor looks like a three-meter-diameter Frisbee containing a two-seater couch, eight turbofans and a small tail. To sidestep Federal Aviation (FAA) regulations governing aircraft, the M200G can only fly at an altitude equivalent to its width (three meters, or nine feet) so that it can be categorized as a ground-effect craft and not an airplane.

Moller claims that production is finally a possibility thanks to the mass-production of the Rotapower rotary engines that provide its power.

The company is positioning the M200G as an all-terrain vehicle (ATV) capable of operating over water, snow, mud and agricultural crops rather than a VTOL family conveyance.

Closer to the Jetsons ideal is Moller's M400 Skycar. This would be a four-seater sedan with four tilting turbofans to give true VTOL capabilities. Moller hopes that sales of the M200G will add credibility to the flying car concept and eventually make commercial production of the M400 Skycar a reality.

But those expecting to put a deposit on a 2010 model-year Skycar may be disappointed. In 1997 Moller claimed to prospective stockholders that 10,000 Skycars would be in the air by the end of 2002. In 2003 Moller was pursued in court by the federal Securities and Exchange Commission for violation of federal securities laws. The company was found to have over-hyped the feasability of the Skycar in order to generate investment capital.

Competition for the Skycar comes in the form of the X-Hawk. The brainchild of Israeli-based Urban Aeronautics, the X-Hawk is a closed-rotor personal VTOL concept. Yet to make it to physical concept stage, Urban Aeronautics has nevertheless demonstrated the concept in simulator form.

Urban Aeronautics' Janina Frankel-Yoeli says that the simulated X-Hawk is easier to fly than a helicopter but admits that a civilian driver would need a pilot's licence.

Frankel-Yoeli explains: "We believe that it will still be quite a while -- decades -- before the fantasy of an everyman's flying car becomes a reality."

She estimates the cost would be equivalent to a helicopter of similar passenger capacity (approximately $2 million in today's money) and therefore beyond the reach of the average consumer. And that's before sorting out the regulatory and air traffic management (ATM) infrastructure.

In the meantime Urban Aeronautics is concentrating on developing the X-Hawk as a complement to existing helicopter fleets. The company hopes to have an unmanned "mule" prototype flying by the end of 2009, with a full-sized X-Hawk demonstrator by the end of 2011.

Both companies' websites confidently predict a future of flying cars. But proof of the working technologies needed to make such vehicles possibly is sketchy at best. Videos on Moller's website show an M200 hovering above the ground, but with a safety wire connected to an overhead crane. While the video of Urban Aero's "Hummingbird" personal flying platform is an inconclusive three seconds long.

Coppinger explains that flying cars will have to be as easy to drive as normal cars in order that there is a large enough market to bring the unit cost of the vehicle down. He adds: "The vehicle's maintenance costs and fuel/energy consumption costs will have to become cheaper for people to afford its running costs.

"It will also require substantial advances in ATM systems, with the potential for hundreds of thousands of vehicles flying at low altitudes close to each other and over populated areas. And where do you land? On a special highway on-off ramp for take-off and landing or at special VTOL sites within urban areas?

"Because of the potential of vehicles in flight, for the ATM you may have to choose a decentralized system relying on individual vehicle computer systems using a "sense and avoid" technology that is aware of the other vehicles in nearby air space. And so while all of them can work separately, they can all maneuver to avoid each other -- rather like birds can fly in flocks and never collide."

Where's your flying car? Not coming to a dealer near you any time soon.

Will we ever have flying cars? And if we did, would you buy one? Share your views and read others' thoughts in the Just Imagine forum.