BEIJING, China (AP) -- China's trade surplus soared nearly 50 percent in 2007 to a record, despite safety worries about Chinese products and a slowdown in export growth late in the year, according to government data released Friday. 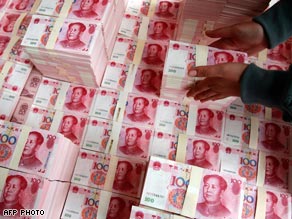 The trade surplus could give ammunition to U.S. lawmakers calling for trade sanctions.

The sharp rise could add to pressure on Beijing to act on currency controls and import barriers, possibly giving ammunition to U.S. lawmakers who are calling for trade sanctions.

The country's annual trade surplus -- or the amount exports exceed imports -- ballooned to $262.2 billion, up 47.7 percent from 2006, the General Administration of Customs said.

That was below the $300 billion figure forecast by some economists but reflected strong demand for low-cost Chinese exports at a time of concern about the safety of products, ranging from toothpaste and seafood to tires and toys.

"The overall number actually was lower than what we expected, and I suspect it had something to do with, partly, the U.S. story," said Citigroup economist Yiping Huang, referring to recent weaker American retail spending, especially during the key Christmas holiday.

December's monthly surplus was $22.7 billion, the customs agency said. That was up 9.5 percent from the same month of 2006 but well below October's record monthly high of $27 billion.

"The country's soaring trade surplus eased a bit in the fourth quarter last year, with imports catching up and exports slowing down," said a customs agency statement quoted by the official Xinhua News Agency.

China has tried to cool export growth by imposing curbs on sales of steel and some other goods. But Huang said exports should continue to grow strongly so long as the United States avoids a recession.

China's politically-sensitive trade gap with the United States expanded 19 percent to $163.3 billion, according to customs data.

The United States reported a $232.5 billion trade deficit with China in 2006 and last year's gap is on track to pass that. The two governments count and compile trade data differently, leading to differing totals.

China's 2007 trade gap with the European Union rose much faster, expanding by 46 percent to $134.3 billion, according to customs data.

The United States and other trading partners are pressing Beijing to ease controls that they say keep its currency, the yuan, undervalued and give Chinese exporters an unfair price advantage, adding to China's trade gap.

Beijing has allowed the yuan to rise gradually against the dollar but some American lawmakers are pushing for punitive tariffs on imported Chinese goods unless it takes quicker action.

The communist government says it is not intentionally pursuing a large trade surplus, and the flood of cash pouring into the economy from export revenues is straining the central bank's ability to control pressure for prices to rise.

All About Trade Barriers • Trade Policy • China • Imports and Exports