BEIJING, China (CNN) -- Xu Yunyun is bracing herself for another unusually busy year. 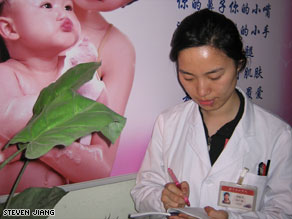 Obstetrician Xu Yunyun is expecting an unusually busy year thanks to the Beijing Olympics.

The obstetrician at Peking Union Medical College Hospital, one of the city's premier health facilities, has seen her maternity ward filled to capacity since the beginning of last year.

"We have had to add beds in the hallway," said Dr. Xu one recent evening after a 10-hour shift. "We have been delivering 150 babies a month -- 50 percent more than before."

The scene at Dr. Xu's hospital is merely the tip of the iceberg. Last year Beijing welcomed some 170,000 newborns, a near 3-percent increase from 2006, state media reported.

Many attributed the boom to the Chinese zodiac. Since 2007 was the Year of the Pig, women across the country reportedly timed their pregnancies to give birth to so-called "golden pig babies," who are said to be blessed with prosperity.

"People really still believe in this kind of association," observed Dr. Xu, who joined the hospital three years ago.

"When I was interning here during the Year of the Sheep a few years ago, the ward was noticeably quieter."

"Tradition says to avoid giving birth during the Years of Ox, Horse and Sheep. They are all grazing animals, and babies born under these signs will have a hard life."

This year marks the return of the rat, normally an unpopular sign as well. Many potential parents, however, appear to be viewing 2008 as the year China hosts the world's biggest sporting event for the first time.

News stories abound about couples eagerly awaiting the arrival of their historic and auspicious "Olympic babies," with 18 million infants estimated to be born nationwide this year.

Some local newspapers have even reported pregnant women requesting to deliver on August 8, by Cesarean section if necessary, to coincide with the opening ceremony of the Beijing Olympics.

"I have had patients who picked a specific hour after consulting fortune-tellers," Dr. Xu recalled. "We have to say no to such requests -- we can't endanger the mother's and baby's well-being for a supposedly lucky birth date."

With 2009 being the Year of the Ox, Dr. Xu is not expecting a break anytime soon. Although this is still a grazing animal, she thinks the lack of distinction between "oxen" and "bulls" in Chinese may give the year a new economic appeal.

"With the stock markets in the doldrums, I bet many parents would love to have a 'bull baby' to bring about a bull market," Dr. Xu predicted. "I am sure I'll be busy as ever."

"Too bad there is no Year of the Bear," she added with a laugh.