LONDON, England (CNN) -- Few racing fans will forget the day Frankie Dettori stormed into the history books as the first man to take seven winners past the post on a seven-race card. 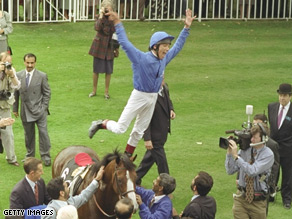 It happened in the summer of 1996 at Royal Ascot, the British racecourse founded in 1711 by Queen Anne who considered it the ideal place for "horses to gallop at full stretch."

And gallop he did; seizing seven wins from seven races. The win sent a tremor of excitement through the racing industry, made a hero of the small man from Sardinia and stripped ashen-faced bookmakers of millions.

"I think that the bookmakers lost in the region of £50 million, $100 million, in today's money, so history was made," Frankie Dettori recalls.

"We've been racing thoroughbreds for 300 years and I'm the first one to get there, and good luck to the guy who follows me."

Few think that anyone will. The odds on him winning the straight set were 25,095 to one.

Millions watched his victory in the stands and on television; the BBC's Grandstand cut into its traditional Saturday afternoon sports coverage to show the pictures live from Ascot.

Ray Cochrane, Dettori's friend and manager, had the rare pleasure of watching the drama unfold in front of him, literally.

"I was actually riding that day. Everybody wanted to beat him on that last race," Cochrane says.

"Then we start to hear this roar, from Swindly Bottom, a mile from home. You could then hear the crowd from the grandstand starting to shout -- they were just lifting him home."

Among the crowd was Nick Smith, head of public relations for Ascot racecourse.

"The atmosphere in the winners' enclosure was amazing. We actually had champagne for him after the sixth, and then after the seventh the whole place just erupted."

hear more of Nick Smith's memories of that day »

"We abused him after the race, covered him in champagne, gave him a good hiding," recalls Cochrane. "It was a great day, a great day for racing really, never mind just him." hear more from Ray Cochrane on Frankie's feat

Frankie Dettori's historic win was splashed across the papers. His multiple victories became known as the "Magnificent 7." Headlines declared Frankie "untouchable" and a "turf act to follow."

"It took races off the sports pages and onto the front pages," says Robin Oakley, CNN's European Political Editor and avid racing fan.

"Frankie was already a well known jockey before the Magnificent 7, but it did turn him into a household name," he says.

Frankie Dettori is under no illusions as to who's to credit for his win and the fame that's followed.

The horse who took him first past the post for the seventh time that day is now long retired and spends his days grazing in the grounds of Dettori's home in the traditional British racing town of Newmarket.

"This is Fujiyama Crest," Dettori says, holding a feed bucket to the nose of an aging gelding.

"He was owned by a Japanese owner and then after that he went into jumping but he wasn't very good."

"I bought him in private and now he's our house pet. I ride him from time to time, my wife, the kids ... but he spends most of his life in the field with the other ponies."

"After winning the seven races and all those big races I won at Ascot I asked if I could have it, and they said yes, so after the last race of the last meeting at Ascot I took it off the ground and I put it in the horse box and I planted it here."

In 2001, Ascot erected its own monument to Frankie Dettori; a lifesize bronze statue of the jockey at the entrance to the famous racecourse. more on Frankie Dettori's statue at Ascot

"Every time I pass by it just reminds me what an achievement that was," he says.

All About Horse Racing