Is carbon offsetting pie in the sky?

LONDON, England (CNN) -- The evidence seems incontrovertible: If you get on a plane these days, you are almost certainly contributing to climate change. 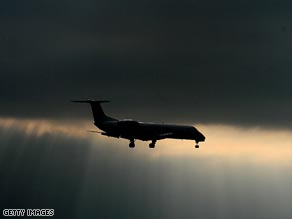 Although arguments vary about the scale of the impact of the aviation industry, scientists, politicians and the industry itself acknowledge airlines are a major source of carbon emissions.

The European Union estimates airlines contribute about three percent of all carbon dioxide emissions in the 27-member bloc; some put the figure globally at closer to ten percent.

In the last decade air passengers with a green conscience have been offered a way out of the moral bind they find themselves in, via the concept of carbon offsetting.

If you really need to take a plane simply pay some money to an offset company and the carbon debt of your flight can be cancelled out. Offset firms do this by helping fund projects that reduce carbon emissions directly -- tree-planting, for instance -- or indirectly, by curbing dependence on fossil fuels -- like investment in green energy.

But how much real impact can offsetting have on tackling climate change? Or is it just a convenient way for people to assuage their guilt while not having to change their lifestyles?

The latter view is shared by many environmentalists, who have compared the growth of offsets with the Catholic Church's practice in the Middle Ages of selling indulgences to get to heaven.

Critics say offsets only serve as a distraction from the bigger picture while allowing companies the chance to claim "an environmental credibility they just don't deserve."

Kevin Smith works for Carbon Trade Watch, a project of thinktank, the Transnational Institute which keeps tabs on the offset industry.

According to Smith offsetting is "essentially designed to delay a change from happening. They (offset firms) are allowing individuals, companies and countries to wriggle out of their responsibility to make real change in the face of climate change."

Aside from arguments over the basic premise, offsetting firms have also run into controversy over their methods in recent years. Without a proper regulatory body, the credibility of some companies has been called into question.

When you pay for one ton of carbon to be offset, for example, how sure can you be that this is what actually happens?

An investigation by The Guardian newspaper last year exposed major flaws in the offset market. According to the paper, one of the companies recommended by the UK government, Equiclimate sold thousands of tons of offset which were based on it buying up and then "retiring" special permits which allow EU countries to emit specific amounts of carbon.

When it subsequently came to light that the EU had accidentally distributed an extra 170 million of these permits, Equiclimate's scheme was proved worthless in both financial and environmental terms.

"There are a range of companies and they go from the well-intentioned, though I would say naïve, to cowboys who are out there to fleece the gullible," says Smith.

A brief online experiment illustrates the scale of the problem for the consumer. CNN typed in "carbon offset" as a search term in Google and for the first five offset firms that came up, we checked the carbon calculator for a return flight from London to Tokyo.

There were wide variances not only in price, but also in the amount of carbon dioxide supposedly generated: The highest carbon calculation was 2.79 tons, with the lowest only 1.1 tons. Meanwhile, prices for offsetting the journey ranged from £14 ($28) to £44 ($88).

Edward Hanrahan, executive director of UK offsetting firm Climate Care admits the lack of a regulatory body has led to some poor business practices in the industry.

However, he insists many of the failures have been due to a lack of scientific knowledge rather than any "bad intent." He advised consumers to use offsets which adhere to one of the voluntary standards within the industry, for example the Voluntary Gold Standard which is backed by Greenpeace.

According to Hanrahan, Climate Care is investing some its cash from offsets to fund a small hydroelectric project in Zambia, which will replace the old and inefficient diesel generators used at present.

He says the carbon footprint in Africa is higher than you might expect because the types of fuel used are "very dirty and the emissions are extremely high."

Assertions like this might leave many scratching their heads, not least members of the U.S. Department of Energy's Carbon Dioxide Information Analysis Center who calculated that in 2004 carbon emissions per capita in Zambia were about one percent of levels in the U.S., and just two percent of those in the UK.

The idea that the money generated from offsetting should go to cutting the tiny proportion of global emissions created by Africa whilst the West -- the real culprit when it comes to CO2 -- marches on unchecked, leaves many feeling incredulous.

Wolfgang Mayrhuber, the CEO of Lufthansa, understands consumers' concerns and admits that his priority is improving aviation technology to bring down emissions rather than offsetting.

All About European Union