(CNN) -- The Wiggles have been officially wiggling for 17 years now, entertaining children with music, television, videos and films that have become modern classics. 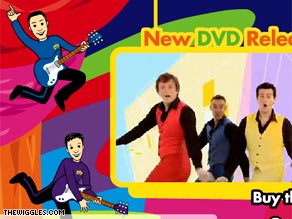 The Wiggles have been entertaining children with colorful, clean-cut songs since 1991.

And since 2003, in addition to their native English, they also wiggle in Mandarin and Spanish, reaching out to the Taiwanese and Latin American public, respectively.

Together with fellow musician Jeff Fatt, who played with Anthony in the popular 1980s band The Cockroaches, they formed The Wiggles and released a self-titled album on ABC Music in 1991.

Fifteen years and 27 DVD releases later, they had been awarded with 17 Gold, 12 Platinum, 3 Double Platinum and 10 Multi Platinum Awards for sales of over 17 million DVDs and 4 million CDs worldwide. They have also been awarded with Highest Selling Children's Video Sales in 1995, 1996, 1998 and 1999 at the ADSDA Awards.

The Wiggles made their U.S. debut at the famous Wall Mart in June 1999, while performing in shopping mall parking lots. In 2003 they performed 12 sold-out shows at Madison Square Garden in New York City and performed to over 250,000 people in November 2005.

That year also initiated a series of amusement-park openings, from Wiggles World at Dream World on the Gold Coast of Australia, to a second Wiggly Play Centre to be launched in Dallas, Texas, USA.

All About The Wiggles