Which came first -- the word or the image?

A rotating representative from advertising giant JWT answers your questions exclusively for The Boardroom.

(CNN) -- In print advertisements, which comes first -- the word or the image? 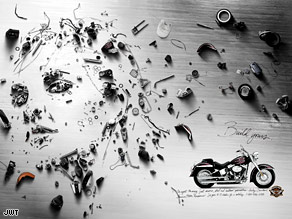 The brief for Harley Davidson parts and accessories was to encourage more riders to personalize their bikes.

The popular answer to this question would be either can come first, but I'm going to stick my neck out and say it's the visual. If for no other reason than to create discussion.

It does all depend on who is asked and what period of time they worked in advertising, but we're in 2008. I am, after all, an art director, so that may explain my opinion.

Any kind of print advertising should be treated as an art form. That's how it all started many years ago and is still true today at its best.

Print advertising is always so much more interesting when it's visual. It's a piece of printed medium that is there to be explored, studied and then rewarded.

My first example for Harley Davidson parts and accessories does exactly that. The brief was to encourage more riders to customize or personalize their bikes. Quite a simple brief really, but when you're asking someone to put their artistic stamp on a bike, it's a little dull to do it through words alone.

Hence, the visual of a face made out of many Harley parts and meticulously art-directed at the same time. The line "Build Yours" came after the visual idea. It's a good line that acts as a signature to the picture. No fancy words needed. Just simplicity.

The next example is equally as simple. It's an ad for Sony In-car speakers. Sony makes damn good speakers with an amazing sound, and they wanted to tell everyone that.

However, everyone talks about sound, and when they do it in print it hardly ever comes over as believable, mainly because a print ad has no sound attached to it!

So rather than talk about the sound, the ad talks about the experience that comes with the sound.

If you know your music, then you'll recognize the famous Bob Dylan album cover "Freewheelin'." Print advertising can be very effective when it subverts what people already know.

In this case, the album cover is recognizable, but its context completely changes by looking at it from the point of view of an open top car. With clever lighting on the car and fabulous retouching, the car looks like it's in the street where the album cover was shot.

The line, "Get closer to the music" does all the work in explaining the idea, but the visual does all the emotional heavy-lifting in describing the experience. Once again, the visual came first.

As I said at the beginning, opinions will vary and perhaps it's true that either line or visual can come first, but this is based on my own experiences.

Maybe someone should write a case for the line?

All About Print Advertising