(CNN) -- Asian markets on Friday rallied after Wall Street surged on news central banks around the world were pumping billions of dollars into money markets and the U.S. government was planning a broad program to stem the credit crunch. 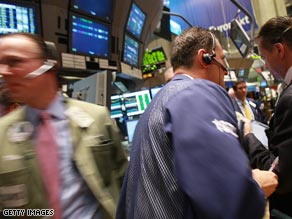 Hong Kong's Hang Seng opened up more than 7 percent, Japanese share prices were up about 3.3 percent, and Australian shares were up about 4 percent. Taipei and Singapore shares also showed gains.

U.S. Treasury Secretary Henry Paulson and Federal Reserve Chairman Ben Bernanke briefed House and Senate leaders Thursday evening on a program to let banks get rid of mortgage-related assets that have been hard to value and harder to trade.

Democrat Barney Frank of Massachusetts and chairman of the House Financial Services Committee said he believes legislation could be acted on next week.

The injection of cash, which amounts to an expansion of up to $180 billion in available funds, is an effort to fuel economic activity.

The New York markets had most time to digest and react, and the Dow Jones industrials, the Nasdaq and the S&P all ended the day more than three percent up. The Dow wiped out much of its Wednesday losses which was its second worst day of the year.

In Europe the picture was positive for much of the day but by close of trading, Britain's FTSE-100 was down half a percent, despite Lloyds TSB's proposed $21.8 billion deal to acquire struggling HBOS, Britain's biggest mortgage lender, helping to ease some concern among traders there.

In Latin America, markets in Argentina and Brazil rose on Thursday during a rollercoaster week.

Watch reaction to the Wall Street turmoil in Buenos Aires »

Watch what's being watched in Asia »

With major financial and insurance institutions teetering, commercial banks have tightened their lending policies and increased interest rates, taking billions of dollars out of the economy.

In addition, the Federal Reserve acted to ease a spike in overnight lending rates in the U.S. by injecting $55 billion into the domestic banking system.

"We're very grateful that the rescue package has been put on the table, because frankly the world's inter-bank markets are just simply not working in the manner that they should do," said David Buik of the BGC Partners brokerage firm in London. "There's a wholesale mistrust ... amongst everybody."

"It is essential that the central banks do stand there and massage the trust back into action," Buik said. "Without them, we would be in unbelievably uncontrollable turmoil."

Britain's Financial Services Authority also temporarily stopped short selling -- the practice of selling securities the seller does not own, in the hope of repurchasing them later at a lower price. TIME.com looks at the short sellers

It is an attempt to make money out of an expected fall in price and has been partially blamed by some analysts for pushing down share prices.

Thursday's more positive news contrasted sharply with the previous day on Wall Street, when the Dow Jones industrials tumbled 449 points -- its second worst day of the year, but only the second worst day this week. The Nasdaq and the S&P also suffered drops of more than 4 percent.

The sell-off came in the wake of investment bank Lehman Brothers' bankruptcy, Merrill Lynch's sale to Bank of America, and the U.S. government announcing an $85 billion plan to bail out insurance giant American International Group (AIG).

"It's a complete collapse of confidence," Francis Lun, general manager of Fulbright Securities Ltd in Hong Kong, told The Associated Press. "The financial crisis in the U.S. is hitting everyone, everyone is running for cover. If the largest insurance company can fail, than no one is safe."

The remaining two Wall Street investment banks were hit particularly hard on Wednesday with Morgan Stanley down 29 percent and Goldman Sachs down 21 percent.

The deal came just two days after Barclays walked away from talks to buy the beleaguered financial institution in its entirety.