LONDON, England (CNN) -- Blake Mycoskie was traveling in South America when he saw, for the first time, hundreds of children without shoes. 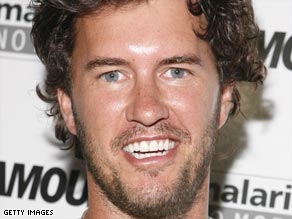 TOMS founder and entrepreneur Blake Mycoskie says he wanted to make money and do good at the same time.

"I had never met anyone who didn't have shoes," the veteran entrepreneur told CNN.

That visit to a village in Argentina inspired the creation of a socially responsible footwear company that blends philanthropy and business.

Mycoskie called the company TOMS: Shoes For Tomorrow -- a name that reflects his desire to provide shoes for disadvantaged children in a sustainable way.

Mycoskie, now 32, said he realized he could make money and do good at the same time with TOMS.

The company's mission is uncomplicated: It gives a free pair of shoes to a child in need every time it sells a pair.

The stylish slip-ons, which Vogue magazine declared "cool shoes for a cool cause," have become a must-have item among fashion elite and received the People's Design Award from the Smithsonian's Cooper-Hewitt Museum last year.

By the time he launched TOMS, Mycoskie already had four start-ups under his belt. But he didn't always have his sights set on the business world.

Growing up, his aim was to play professional tennis. He trained hard and earned a scholarship to Southern Methodist University, where he studied philosophy and finance.

But an injury sidelined him his sophomore year. That's when he got the idea for his first venture, a college laundry service.

Within one year, the business, Easy Laundry, had 40 employees, had expanded to three schools and was generating nearly $1 million in sales.

That's when Mycoskie realized he was born to be an entrepreneur and dropped out of school.

Mycoskie eventually sold the company and began other ventures, including an outdoor advertising company and a 24-hours-a-day, 7-days-a-week reality TV channel, which he launched after appearing on the second season of "The Amazing Race" with his sister.

They finished the competition in third place (missing out on the million-dollar prize by just four minutes), but the experience exposed Mycoskie to the astounding amount of poverty in the world -- a problem that TOMS is tackling today, one pair of shoes at a time.