(CNN) -- The credit crisis has transformed the global financial landscape, bankrupting established names and prompting unprecedented interventions by governments and central banks to save others from collapse as they buckle under the weight of "toxic debts." This timeline charts the key moments in that process. 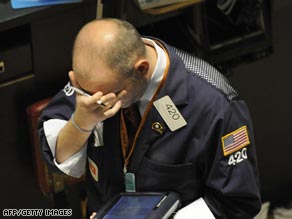 June: Two Bear Stearns-run hedge funds with large holdings of subprime mortgages run into large losses and are forced to dump assets. The trouble spreads to major Wall Street firms such as Merrill Lynch, JPMorgan Chase, Citigroup and Goldman Sachs which had loaned the firms money.

Oct. 24: Merrill Lynch announces losses to be over $8 billion.

May 12: HSBC writes off $3.2 billion in the first quarter linked to exposure to the U.S. subprime market.

Sept 7: Fannie Mae and Freddie Mac effectively nationalized by the U.S. Treasury which places them into "conservatorship."

Sept. 9: Lehman Brothers shares plummet to lowest level on Wall Street in more than a decade.

Sept. 29:
- U.S. Congress rejects $700 billion plan to bail out the U.S. financial system.
- UK's Bradford & Bingley nationalized. Santander to buy deposits for $38.2bn
- German bank Hypo Real Estate to be bailed out by banks and government.
- Citigroup, the world's largest bank, says it will buy Wachovia.
- Belgian giant Fortis is bailed out by Netherlands, Belgium and Luxembourg.
- Royal Bank of Scotland shares lose a fifth of their value.
- Iceland part-nationalizes Glitnir, one of its biggest banks.