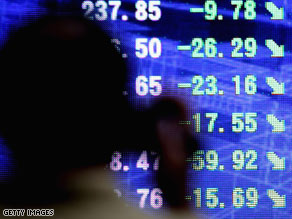 The Australian Securities Exchange finished down less than a percent at 4,774.10, and Hong Kong's Hang Seng was down about a percent at 18,206.68.

Singapore's Straits Times Index was off about half a percent and the Taiwan Weighted was down about a percent.

"Investors are still concerned about the efficiency of this rescue plan and how it can help the global economy," said Aric Au, marketing manager for institutional sales at Phillip Securities in Hong Kong. "But at this moment, nobody is sure about this. They need to have more information about the finalized plan," The Associated Press reported.

Credit markets remained pinched, with closely watched measures of bank fear still at elevated levels. The ISM manufacturing index, a key reading on the economy, fell to a seven-year low near a level that suggests a recession.

The Dow fell more than 100 points Wednesday morning but curbed those losses in the afternoon as more specifics about the modified bailout plan were released. Financial and homebuilding shares rallied, but many other stock sectors declined, including technology and oil services.

The U.S. Senate's vote Wednesday evening on the revised bailout plan puts pressure on the House of Representatives when it votes again on the measure, probably later in the week. Explainer: What next for the bailout plan?

Banking shares have fallen significantly in recent days and on Wednesday the EU Commission president urged European governments to work together in a bid to shore up financial systems hit by the credit crisis.

Watch how European markets are reacting »

Jose Manuel Barroso said it was "critically important for the credibility of markets" for governments to work together to bail out troubled banks, according to The Associated Press. (Full story)

Barroso was speaking after European central banks injected a further $60 billion to markets. The European Central Bank pumped in $50 billion and the Bank of England offered $10 billion in overnight operations.

Central banks around the world, including the U.S. Federal Reserve and the ECB, injected billions into money markets in the wake of the Lehman Brothers collapse. Read a timeline of the crisis

But analysts warned that doubts remained about the long-term outlook for the global economy. In London for example the LIBOR -- the rate at which banks lend money to each other -- rose sharply to 6.88 percent. CNN's Adrian Finighan said this indicated there was little liquidity in the system.

Others feared that possible compromises in the new bailout package raised questions about its effectiveness. "The market is already expecting the plan to pass. The question now is what's next," Norihiro Fujito, senior investment strategist at Mitsubishi UFJ Securities in Tokyo told The Associated Press.

The original bailout proposal, which would give U.S. Treasury Secretary Henry Paulson the authority to buy up toxic mortgage-related assets in troubled banks, was rejected Monday by the House, causing the Dow Jones industrial average to plunge 777 points -- its worst performance since the 1987 crash. Bailout explainer: What got killed

But U.S. markets rallied dramatically Tuesday amid renewed expectation that an economic rescue plan will be agreed before the end of the week.

The revised bailout plan includes a number of new provisions designed to make the bill more acceptable to skeptical lawmakers, notably a temporary measure raising the threshold at which bank deposits are protected from $100,000 to $250,000.

According to a copy of the bill posted on the Senate Web site, the Federal Deposit Insurance Corp., which guarantees bank deposits, would be able to borrow from the Treasury to cover any losses that might occur as a result of the higher insurance limit.

But the core of the Senate bill is the Treasury's proposal to let financial institutions sell to the government their troubled assets, mostly mortgage related.

And as in the House bill, the Senate would allow the Treasury access to the $700 billion only in stages. The Senate bill is also similar in that it includes a provision that would require the president to send a legislative proposal to Congress that would require the financial industry to reimburse taxpayers for any net losses associated with the program after five years.

The bailout bill is seen as the beginning of a long process towards cleaning up the bad debt mess.

Following the first bill's rejection, President George W. Bush said in a brief televised address at the White House: "Our economy is depending on decisive action from the government. The sooner we address the problem, the sooner we can get back on the path of growth and job creation. This is what elected leaders owe the American people, and I am confident that we'll deliver."