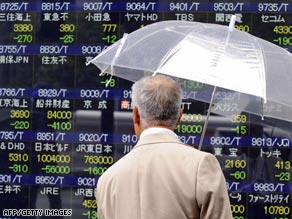 Asian markets fell as investors sought safer investments ahead of the U.S. House vote on a bank rescue plan.

Singapore's Straits Times Index had sloughed off more than two percent in afternoon trading and the Shanghai Composite was off a fraction. The Taiwan Weighted was up less than a percent -- one of the few markets posting a gain on Friday.

The Korea Exchange in Seoul, South Korea was closed on Friday.

Stock markets on Wall Street and in Europe suffered another tough day Thursday despite the U.S. Senate's approval of the modified financial rescue plan.

The rejection by lawmakers in the lower house on Monday threw financial markets around the world into chaos, causing the Dow Jones industrial average to plunge 777 points -- its worst performance since the 1987 crash.

The core of the Senate financial bailout bill is a plan to buy troubled assets from banks, but the proposal includes a number of new provisions aimed at ordinary people struggling under the credit crunch. Bailout explainer: What got killed

The changes -- including $110 billion in tax breaks and other sweeteners -- were intended to attract more votes from the House -- especially from Republicans, two-thirds of whom voted against that version. Explainer: What next for the bailout plan?

"With the improvements the Senate has made, I believe members of both parties in the House can support this legislation," President George W. Bush said in a statement. "The American people expect -- and our economy demands -- that the House pass this good bill this week and send it to my desk."

Congressman Barney Frank, chief Democratic negotiator of the bill in the House, told CNN the bill had a better chance of getting passed the second time around.

"The reality has hit some members," Frank said late Wednesday, adding later, "The main change is reality -- it's not possible now to scoff at the predictions of doom if we don't do anything."

Speaker Nancy Pelosi indicated that the House "will act in a bipartisan way to restore market confidence as well as Main Street's confidence in our economic future."

Banking shares have fallen significantly in recent days and on Wednesday the EU Commission president urged European governments to work together in a bid to shore up financial systems hit by the credit crisis.

European leaders plan to meet Saturday in France to discuss the crisis, a statement from the French president's office said.

Jose Manuel Barroso said it was "critically important for the credibility of markets" for governments to work together to bail out troubled banks. Read more about possible EU rescue plan

Central banks around the world, including the U.S. Federal Reserve and the ECB, have injected billions into money markets in the wake of the Lehman Brothers collapse. Read a timeline of the crisis

The Bank of England said Thursday that banks and other lenders in Britain would make further cuts in lending to households and businesses over the next three months. Read more about lending cuts

Lenders also expect lower demand for mortgages and business loans in the next quarter, tighter terms and conditions on loans, and an increase in defaults on loans, the Bank of England said.