France injects nearly $14B into banks

PARIS, France (CNN) -- The French government is injecting €10.5 billion ($13.9 billion) into the country's six largest banks to help stabilize the economy and ensure the banks have adequate lines of credit. 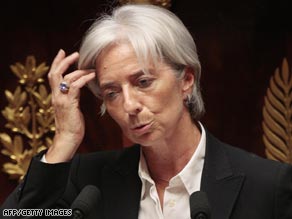 The French Finance Ministry announced the move Monday, saying it is part of the government's efforts to shore up the economy amid the global financial crisis.

"This investment will permit the banks to increase their credit so they can thoroughly support credit to households, professionals, and businesses," the finance ministry said in a statement.

Her announcement came as the top three executives at Caisse d'Epargne resigned under pressure from the government after the bank lost €600 million trading derivatives amid the worldwide stock market collapse earlier this month.

Last week, France announced that it would set aside €360 billion ($483.4 billion) to help the economy, including €40 billion ($53 billion) to recapitalize its banks. The money announced Monday is part of that funding.