BERLIN, Germany (CNN) -- German investigators raided the Frankfurt offices of KFW bank Wednesday in an investigation into a payment of more than $400 million made in error to failed U.S. investment bank Lehman Brothers. 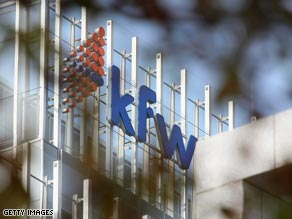 The government-owned KFW bank group transferred €319 million ($412 million) to Lehman Brothers on September 15, after the U.S. bank filed for bankruptcy, the state prosecutor's office in Frankfurt said in a statement.

Authorities are investigating KFW board members and bosses on suspicion of embezzlement, the prosecutor's office said.

They want to know whether KFW officials were criminally negligent by failing to prevent the money transfer despite knowing about Lehman's liquidity problems and the impending international banking crisis.

"We are fully cooperating with the authorities and will provide them any documents they wish to see," Schweickhardt said.

Schweickhardt said the money was transferred to Lehman on the morning of Monday, September 15, as part of a long-standing two-part transaction that had been in motion since July. The transaction was among about 1,000 automated transactions set up for that morning -- a normal volume for the agency, he said.

Although "people had discussed over the weekend the fact that Lehman Brothers was in trouble, no one thought to check the actual transfers in the system," Schweickhardt said.

The mistake was spotted only a couple of hours later and the agency's chief executive was informed, he said. The following Thursday, the company suspended three directors; they were fired on September 29, he said.