(CNN) -- Wedding bells always make sweet music for India's retailers, and with November to January playing host to a total of 33 "auspicious days" for nuptials, it's almost enough for store owners to put aside their worries of what the global downturn might bring. 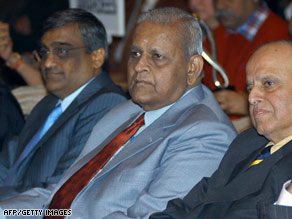 Kishore Biyani, founder and CEO of Future Group, India's biggest domestic retailing and consumer finance group, is one high-profile shopkeeper who has no fears that customers will stop spending, even as the credit crunch bites and India's hitherto impressive economic growth rate takes a dive.

Biyani acknowledges that there is a slowdown, but says consumer demand is still there.

"The wedding season should be good for us," Biyani told CNN.com."Our sales during Diwali (the festival of lights in October) were quite good, up 18 percent year on year."

"But retail is more than a numbers game," he says. "It's about how you excite and attract customers."

He brings a big vision to his business model: Deliver everything, everywhere, every time to every Indian consumer in the most profitable manner. "We want to own the Indian customer's wallet, wherever he chooses to spend it," he says.

And if the consumer has no money in that wallet, then Biyani's consumer credit arm, Future Money, will lend it to them. He's tightened credit in the past six months, but is still lending for larger items.

"The consumption boom will drive retail growth in India. We need to look at innovative ways of making money available to the consumer," he says.

Biyani is forever watching shoppers, fearful that if he doesn't, he might lose sight of their hopes and needs. He says India is a society with big aspirations, but even with the rapid growth of the middle class, only a relative handful of the country's 1.2 billion people have much money to spend.

More money needs to get into the hands of "the starving class," Biyani says, or what he calls "India 2.0" so that the spenders rise to 25 percent of the population and create a substantial customer base.

"The base is growing by 2 percent year, so it's going to take a while," he says, noting there will have to be a reassessment as the economy cools.

By 2011, industry experts believe modern retail could be worth as much as $100 billion out of a total $600 billion Indian consumer market.

Along with big business houses such as Reliance, Bharti, Tata and Birla, Biyani is just one of many entrants jostling for a place at the head of the modern retail queue, eager to bring supermarkets, hypermarkets, malls, specialty shops and "own brands" to customers.

But traditional retail still rules, particularly in the countryside. Many millions of Indians are yet to enter an air-conditioned mall or supermarket, just as they have yet to open a bank account or seek credit from anyone other than the local moneylender.

Organized credit of the type envisaged by Biyani currently reaches only 3 percent of the population. And while easy credit has fueled the recent consumption boom among young people, the tap is being turned off by some banks.

Credit card numbers are down from a high of 27.5 million earlier this year to 26.7 million in October as banks cut up defaulters' cards. Still, retail technology consultancy Celent forecast last month that debit cards -- now numbering just over 100 million -- will reach 169 million by 2010 in India, while credit card numbers will rise to 40 million.

Big Bazaar CEO Rajan Malhotra is as enthusiastic as his boss, noting that the chain's "Once in a Lifetime" promotion last month took sales to record levels. "I think it is up to modern retail to create occasions of consumption in a market like ours," Malhotra told CNN.com.

Biyani says he and his Future Group will keep learning from their mistakes. The growth of modern retail in India has been so rapid, "there is no reference point."