BEIJING, China (CNN) -- China's president has vowed to continue the economic reforms that have transformed the once poverty-riddled nation into an industrial powerhouse. 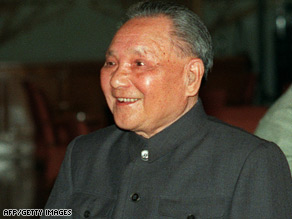 Speaking on the 30th anniversary of China's decision to open itself up to the outside world, President Hu Jintao told a crowd of 6,000 at Beijing's Great Hall of the People: "Standing still and regressing will lead only to a dead end."

Chinese leader Deng Xiaoping was the architect of the economic reform movement, which was to set the country on a radical new course when the first policies were approved on December 18, 1978.

"Reform and opening up are the fundamental causes of all the achievements and progress we have made," Hu said, according to state-run media. He said Deng's vision three decades ago was "completely correct."

Over the past 30 years, China has maintained an average annual growth rate of 9.8 percent -- triple the world average, China's Xinhua news agency reported.

However, Hu warned the Chinese people not to grow complacent, especially in the midst of the global economic crisis. He said China must continue to concentrate on economic development and diversification.

"We must adhere to the correct direction of reform and opening up so as to build a system that is full of vigor, highly efficient, more open and has a favorable environment for scientific development," he said.