LOS ANGELES, California (CNN) -- The sponsor of a proposal to rein in aggressive celebrity photographers is meeting resistance from Los Angeles' top cop, who says the law is not needed when celebrities just behave. 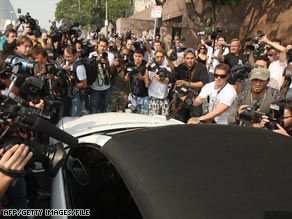 His proposed ordinance is nicknamed the "Britney Law" for the hordes of paparazzi that swarm around pop star Britney Spears, sometimes costing the city thousands of dollars for escorts and other enforcement.

"They act like a pack of wolves stalking their prey, creating havoc in the streets, and are nuisances to innocent bystanders," Zine said at a task force hearing he convened Thursday.

The proposal gained exposure last month when officials from around Southern California asked former independent counsel Kenneth Starr -- whose investigation of former President Clinton spawned its own share of tabloid headlines -- to help craft a law that would protect celebrities without infringing on freedom of the press.
iReport.com: Share your celeb stories and photos

Critics of the plan include Los Angeles Police Chief William Bratton, who argues that it would be difficult to enforce. He also says existing laws can keep unruly packs of photographers in check.

The chief said the city's tabloid darlings could help by providing photographers less to work with.

"If celebrities behave themselves, that solves about 90 percent of the problem," Bratton said. "Britney, the last couple of days, has started wearing clothes again. The paparazzi are leaving town because she's not as interesting when she's not running around without her underwear on."

He said actress Lindsay Lohan "evidently found a new love life, so she's probably in New York hanging out" and that "God knows" where billionaire heiress Paris Hilton had been.

At the hearing, members of the paparazzi also said the law would be impossible to enforce.

"Unless every celebrity has a chaperone of a police officer with a 6-foot tape measure, how are you going to enforce it?" said photographer Nick Stern.