(CNN) -- The U.S. Olympic Committee and the International Olympic Committee are expected to ask a federal judge Monday to shut down Web sites they allege scam customers trying to buy Olympic tickets, according to court documents. 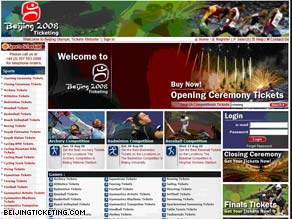 The Web site www.beijingticketing.com is accused in a lawsuit of scamming Olympic ticket buyers.

The IOC and the USOC filed lawsuits on July 22 against several Web sites -- primarily www.beijingticketing.com and www.beijing-2008tickets.com -- for illegally using Olympic trademarks to dupe customers into giving them credit card, passport and banking information.

Lawyers for the IOC and USOC are expected to petition U.S. District Court Judge Jeffrey White on Monday to permanently shut down several sites listed in the lawsuit. The lawsuit names the company XL & H Ltd, known as Xclusive Leisure & Hospitality Ltd. and six other Web sites believed to be fraudulent.

Several consumers who purchased tickets from the site contacted the USOC when they did not receive tickets, despite numerous calls and e-mails to the Web sites founder, according to a USOC press release.

Web sites named in the USOC and IOC lawsuits:

The scam has hit Olympic fans in the United States, Australia, New Zealand, England, Japan, China and Norway, according to media reports.

Australian Olympic Committee President John Coates told local media that relatives of the country's softball team had been victims of the site. The Sydney Morning Herald reported that the New South Wales Government set up a hotline for those duped out of tickets. The hotline has received hundreds of calls from around the globe with consumers detailing losses as high as $57,000.

The IOC and USOC successfully secured a restraining order on July 23 in federal court in Phoenix, Arizona, that shut down www.beijing-2008tickets.com, according to court documents. That site is now shut down and no contact information is available.

The site www.BeijingTicketing.com priced tickets for Friday's Olympic opening ceremony at about $2,000, with events such as swimming selling for between $300 and $500. The site is the first entry that comes up for a Google search for "Olympic tickets," second only to the authorized dealer of Olympic tickets, www.cosport.com.

The site boasts tickets for nearly every Olympic event, with some events showing sell-outs already. The site also looked to assure ticket buyers of its authenticity with a note at the bottom of the site.