WASHINGTON (CNN) -- Dozens of juveniles have been freed from forced prostitution by a nationwide operation that resulted in the arrests of hundreds of other people, the FBI announced Monday. 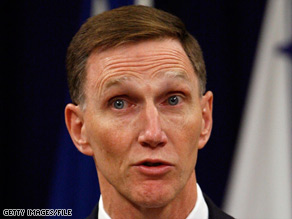 FBI Deputy Director John Pistole says some of the alleged sex traffickers were working in networks of six to 10 pimps.

In the three-day operation, which began Thursday night, the FBI, along with local and state law enforcement agencies, took the 46 girls and one boy -- all of them U.S. citizens ages 13 to 17 -- into protective custody.

"Operation Cross Country II" involved efforts in 29 cities and resulted in the arrest of 73 pimps and 518 adult prostitutes, the FBI said.

Those arrested could face federal or state charges, depending on their alleged activities.

FBI Deputy Director John Pistole said some of the alleged sex traffickers were working in networks of six to 10 pimps.

"Sex trafficking of children remains one of our most violent and unconscionable crimes in this country," he told reporters.

Authorities said some of the alleged prostitutes were found at casinos and truck stops. Others were advertised on the Internet.

Ernie Allen, president of the National Center for Missing and Exploited Children, likened teen prostitution to "21st century slavery" and estimated that tens of thousands of teens may be involved. He said it is "happening on Main Street U.S.A. ... These people are moving kids city to city."

Information from last summer's first "Operation Cross Country" led agents to some of the targets identified in the latest initiative, the FBI said.

When authorities received a tip about a possible juvenile prostitute, an agent would set up a sting operation to determine the person's age; anyone under age 18 was taken into custody.

In all, the initiative has freed 576 child victims from forced prostitution, the FBI said.