WASHINGTON (CNN) -- A distraught, sobbing Afghan Taliban member begged the court for mercy, but got none as an unmoved federal judge here Monday handed down maximum life sentences for convictions on drug trafficking and narco-terrorism charges. 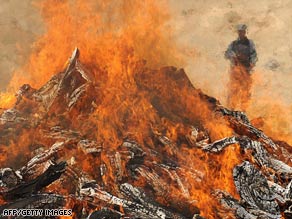 A guard watches over a pile of burning drugs in Kabul, Afghanistan, on June 25, 2008.

Khan Mohammed, 38, of Nangarhar Province became the first person convicted and sentenced in the United States under a 2006 law that increased the penalty for a defendant found to be involved with terrorism and distributing illegal drugs.

Mohammed, who had been extradited from Afghanistan, was convicted by a jury in May of plotting a rocket attack on U.S. military forces and Afghan civilians at Jalalabad Airfield.

He also was found guilty of distributing between $1 million and $3 million worth of heroin into the United States "to kill Americans as part of a jihad."

Mohammed's court-appointed lawyer, conceding that "what he did was wrong," urged U.S. District Judge Colleen Kollar-Kotelly to be lenient and sentence his client to only 20 years in prison.

Then the full-bearded Mohammed, dressed in an orange jailhouse jumpsuit, addressed the judge. With tears streaming down his face, and choking back his words, he begged for only one or two years.

"I have little children and a woman. They depend on me," Mohammed began. "I'm so worried about them." His lengthy emotional appeal went on to include his reason for selling opium.

"In my village that's how you have to make a living. There is no house there without opium," he said.

Justice Department prosecutor Matthew Stiglitz, however, urged the court to "send a message of deterrence," and warned against "the confluence of drug trafficking and terrorism."

"No, he's not the Osama bin Laden of terrorism. No, he's not the Pablo Escobar of the drug world," Stiglitz told the judge. "But this is where the rubber meets the road."

Bin Laden is the head of al Qaeda, while Escobar, who died in 1993, was the most powerful of Colombian drug lords.

"Afghanistan is ground zero for opium, and an almost limitless source of funds to the Taliban," he argued.

Kollar-Kotelly agreed fully with the prosecutors, and strongly admonished the Taliban defendant.

"You were convicted 99 percent by your own words," the judge declared, as she recalled how a "courageous" Afghan police chief wore an undercover wire to record Mohammed's plotting.

"The fact that no one died is only because you didn't get the missiles you wanted," she said.

"In 2006, you celebrated the Americans' use of the opium. It was a jihad. You knew the damage it could cause," the judge continued. "Because of your undiluted hatred for the United States, you might well have launched other attacks had you not been arrested."

Then, concluding dramatically, the judge turned directly to the defendant.

"I heard your concerns for your family but no acceptance of responsibility for your action," the judge said. "Defendants often express worry for their families, but if they considered the consequences of their actions beforehand, maybe they would have acted differently."

All About The Taliban • Heroin • Afghanistan