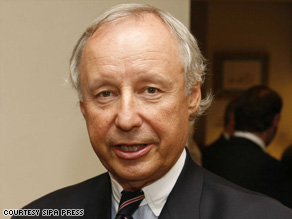 Emergency personnel discovered the body of the 65-year-old French executive at 7:29 a.m. in the Madison Avenue office of Access International Advisors, police said.

Villehuchet suffered "cuts made to his arm, to his wrist and also to his bicep area, with a box cutter," New York Police Commissioner Ray Kelly said at a news conference.

He also told reporters there were pills present, though it wasn't clear whether any were ingested, and there was no suicide note.

Liliane Bettencourt, the world's richest woman, is believed to have entrusted part of her $22.9 billion fortune with Madoff through Villehuchet, according to reports.

The 86-year-old daughter of L'Oreal founder Eugene Schueller is thought to be an investor in a fund managed by Access International Advisors, although her investment isn't public.

Calls to Bettencourt's foundation, Foundation Bettencourt Schuelle, were not returned.

Bettencourt joins other wealthy individuals from Europe and around the world who have lost money -- thought to include Spanish billionaire Alicia Koplowitz, Steven Spielberg and Nobel laureate Elie Wiesel.

Villehuchet's body will be examined and a toxicology report issued Wednesday, said Ellen Borakove, a spokeswoman for the New York medical examiner.

Kelly read a statement from Access International Advisors' attorney saying the firm lost $1.5 billion by investing with Madoff, 70, a former Nasdaq chairman who is accused of operating a $50 billion Ponzi scheme.

Reached by phone, Madoff's attorney, Daniel Horowitz, had no comment.

According to the Securities and Exchange Commission Web site, Access International Advisors no longer registers with the SEC.