Is recession behind spike in bank robberies?

NEW YORK (CNN) -- A rash of bank robberies in New York has the city's police commissioner worried that criminals have turned banks into "virtual cash machines" and some wondering whether tough economic times are fueling the trend. 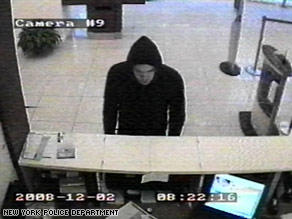 A surveillance camera captures a bank robbery suspect in New York on December 2.

On Monday alone, robbers targeted five banks in the Big Apple, some striking in broad daylight and near famous landmarks.

Police called the incidents unrelated, but they're just the latest examples of the growing tally of hold-ups.

Bank robberies in New York have risen 54 percent compared with last year, with criminals committing more than 430 in the past 12 months, according to the New York police department.

Bank robberies are also up in many areas across the country, including San Diego, California, and Houston, Texas, federal law enforcement experts told CNN.

It's enough for some to link the trend to the rash of layoffs, the plummeting stock market and the bust in the real estate values, all of which have left many Americans in dire financial straits.

"It makes me think that the recession is making people go to extreme measures," a woman who frequents one of the banks robbed Monday told The New York Times.

Watch where the robbers struck »

But Kelly said it's not clear whether the bad economic times are fueling the unusual spike.

"People want to say... it's because of the economy. I think it's too early to make that statement," he said.

CNN security analyst Mike Brooks agreed, adding that although there are typically many bank robberies during the holidays, there are no data to suggest that any recent spike was caused by the economy.

Another expert said it's possible that the difficulty of finding a job right now may be a factor, but he doubted that law-abiding citizens are turning to crime to make ends meet.

"It's hard to attribute the bank robberies to people who were let go from Lehman Brothers or other organizations that are in trouble," said Alfred Blumstein, who has researched criminal justice for 20 years and is a professor of operations research at Carnegie Mellon University's Heinz College.

"I would anticipate that people who rob banks have been involved with crime before because that's not where one is likely to start," Blumstein said.

A person who might turn to robbing banks is someone in their late teens or early 20s who has already broken the law and has decided to move on to a bigger target, he added.

"Bank robbery is a very high-risk activity, because most banks have various surveillance equipment in place, and it requires a degree of aggressiveness that otherwise law-abiding folks are not likely to take on," Blumstein said.

Some officials say the modern, customer-friendly design of banks -- with easy access to tellers and cash -- is too tempting for robbers.

"We don't like the business plan that makes a bank look like a living room," Kelly said "We [advise] just some common sense provisions, such as so-called bandit barriers, so that tellers have some option to act when somebody puts a note in front of them."

In fact, bank robbers have simply handed tellers a note in a vast majority of hold-ups in New York. Kelly put the figure at 80 percent and added that although the rest of the robbers claimed to have a gun, many didn't actually show it.

Mike Smith, president and CEO of the New York Bankers Association, is meeting with the NYPD to see what more can be done to discourage robbers. He said banks have a significant amount of security, some of which may not be visible to the public.

"Are there enhancements? Obviously. Criminals talk to each other, they know what's going on, but typically they are apprehended," Mike Smith said.

CNN's A. Pawlowski contributed to this report.