ATLANTA, Georgia (CNN) -- Andre Rives no longer mows his own lawn and it's not because he's too busy. The thought of cutting his grass brings back some bad memories. 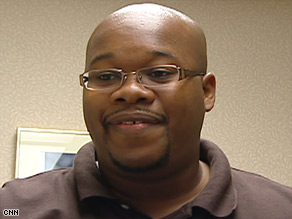 "Man, did this just happen to me?" Andre Rives asked himself after losing three toes in a mowing accident.

Rives, a 28-year-old cable technician from Ellenwood, Georgia, accidentally cut off three toes on his right foot two years ago while trying out his new riding mower.

"I was going too fast and my shorts got caught on the gear shift," Rives recalled. "I came too close to the curb and I couldn't stop. I ended up sliding off and my foot went under."

Rives is one of 100,000 people in the United States in 2006 who suffered an injury in a lawn mower accident.

The American Academy of Orthopaedic Surgeons, which tracked the statistics, said the problem is more common than people think.

The group reported most injuries occur among adults age 25 to 64, followed by children under the age of 5. More than 22 percent of injuries involved the wrist, hand or finger; nearly 14 percent involved the foot, ankle or toes.

"Most of the time it's a pure accident," said Dr. Marvin Royster with the Peachtree Orthopaedic Clinic in Atlanta, Georgia. "They slipped on the lawn mower, the grass was wet or the lawn mower overturned."

Royster described some injuries, such as burns from touching the muffler, as mild. But other risks are greater; a mower can eject a piece of metal, rock or wood up to 100 mph, he said.

In Rives' case, the accident resulted in the amputation of three toes.

Royster repaired some of the damage in the operating room but was unable to re-attach the digits. He met with Rives recently for a follow up visit. "Andre is doing very well," the doctor said. "He has a little trouble with running and getting up on the ball of his foot, but other activities, he's able to do quite well."

The Association of Orthopaedic Surgeons noted that most lawn mower injuries are preventable if some basic safety guidelines are followed.

"The main thing is you need to wear protective clothing," Royster cautioned. Wear protective goggles, gloves, boots and long pants. Never mow barefoot or in sandals. "Mowing the grass with flip-flops on or sandals on, you're just asking for trouble," Royster said.

Have your lawn mower serviced before the start of the season to ensure it's working properly. Do not remove any safety devices on the machine. Be sure to add fuel before starting the engine, not when it's running or hot. The liquid could overflow or flame up.

Finally, keep hands and feet away from the lawn mower blade even if the machine is turned off. Once cleared of an obstruction, a blade can swing around and cause injury.

Rives realized immediately after his accident that he made a number of common sense mistakes. "Even in the hospital, I'd say 'Man, did this just happen to me?' "

He said he's learned his lesson. His wife made him sell his riding mower after the accident. He pays professionals to mow his lawn twice a month.

Rives said that in spite of having just two toes remaining on his right foot "I am not having a pity party for myself. I have to keep going on."