How to survive storm's cleanup

(CNN) -- Neilan Tyree was one of the lucky ones: When the 49-year-old advertising executive returned home to New Orleans three weeks after Katrina hit, he discovered his home on historic St. Charles Avenue was still standing, with relatively little damage. 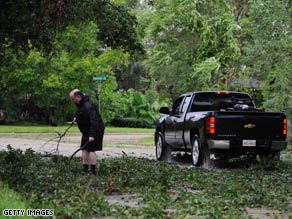 Downed tree branches are one of the first focuses of cleanup in Lafayette, Louisiana, after Hurricane Gustav.

But his building was about the only thing left unscathed -- the city felt as if it had been thrown back into the 18th century, Tyree recalls. There was no garbage pickup or mail delivery, no stores open and -- scariest of all, to Tyree -- nobody to call if you needed help.

Gulf Coast residents returning after Hurricane Gustav probably will have an easier time than Tyree did three years ago -- wind and water damage appear to be much less than from Katrina -- but they still face both challenges and dangers during their rebuilding efforts.

First, there are the dangers associated with the very act of returning. It's important to wait until authorities have given the go-ahead.

While some parishes' evacuation orders were being lifted Tuesday, New Orleans Mayor Ray Nagin has told residents to "hold tight." People can expect to return home on Thursday, he said, after authorities have a chance to survey the damage and work to restore power and sewer service.

When they get the green light, residents should proceed with caution.

"Any time you evacuate hundreds of thousands of people, traffic accidents are a great concern. As people return to the community a lot of the infrastructure is going to be nonfunctional: Traffic signals will be nonoperative; you'll see a lot of wires down," says Allred, adding that floodwaters and flash floods are also potential dangers, which could lead to injury or worse, drowning.

Then there are the dangers that come with the cleanup and rebuilding effort. iReport.com: Did Gustav affect you?

"The thing that people want to do is settle back in, so one of the first things they do is try to clean up," says Dr. Joe Guarisco, systems chief of emergency services at Ochsner Health System, which operates in the New Orleans area.

Guarisco says typical injuries after a storm include people falling off roofs and ladders while making repairs, people hurting themselves with saws or chainsaws as they try to clear away trees, people cutting their hands and other parts of their bodies on sharp or broken objects and people injuring their eyes.

"Be aware of your surroundings," Guarisco urges returning residents.

He says most people know not to drink unsafe water or eat perishable food but says the message bears repeating: When it comes to food in the refrigerator, throw it out.

"Returning residents are not going to have air conditioning in many situations," says the CDC's Allred, "so heat stress is an enormous concern and people need to be looking out for that."

Allred adds, "People that have any pre-existing health conditions that would compromise their ability to deal with stress need to be especially careful."

To help combat heat exhaustion, stay hydrated, he says. "If anyone out there needs to get out of the heat or just recover, rest up, get hydration, there are shelters set up in the potential impact area, and we encourage people to go there," he says.

Last, but certainly not least, there are the dangers linked to living in an area with an infrastructure that is not 100 percent functional.

A big hidden danger is carbon monoxide poisoning. "Because of power outages, people bring gasoline or fossil-fuel powered generators, stoves and grills into their homes, and they're using them in a confined, closed-in space. We see a spike in carbon monoxide deaths after these storms," Allred says.

"Fire is another enormous hazard that we have to deal with," he says. "People are trying to deal with their basic needs: They are trying to cook their foods, see when it is dark." Be careful when using combustibles of any kind, he warns.

"If anybody has a need for medicines, they need to make sure that they are not returning to an area with potentially compromised services without having all of those things they need for their own health and welfare," Allred says.

Tyree says he wishes he had thought of his pre-existing medical condition before returning after Katrina. "I have some immune system-related, chronic health issues, and I wasn't able to get my medications -- I had to jump through hoops to get what I needed -- and then there was the fear of, if anything happened, would I be able to get the proper medical care? And beyond that, am I foolishly putting myself at genuine risk by living in a potentially hazardous environment on a daily basis?"

Allred says residents shouldn't neglect their mental health either. "It's important that if people are feeling self-doubt or depression, thoughts of suicide or emotional issues that they are having a hard time dealing with ... we encourage them to seek out assistance," he says.

Allred adds federal and local authorities have been working together to ensure that information and resources pertaining to mental health are available.

If Tyree had to offer one final lesson, it would be, in a word, wait.

"We have this wonderful American can-do spirit, but sometimes you need to realize that don't have to do it that minute," he advises. "Ask yourself, do you really have to be back the next day? If you can do your business from elsewhere, just do that. In our haste to get back to normal, we leap into action without much thought. I know I did."

All About New Orleans • Centers for Disease Control and Prevention