Baseball gives special-needs kids 'something to brag about' 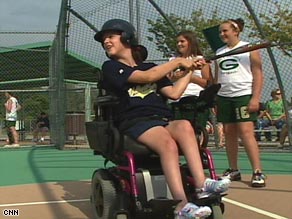 The 14-year-old middle-school student clenched her teeth as she swung the bat into a single.

Instead of running to first base, Lawless zoomed over in her motorized wheelchair.

Lawless has cerebral palsy. She's among nearly 300 children who play in a special-needs baseball league at Bay Creek Park in the Atlanta, Georgia, suburb of Loganville.

"It's actually fun because we get to be kids and we can play like regular people," Lawless said.

What's different about this ballpark is that the field is made of a rubberized material that allows for easier movement in wheelchairs.

"We started out on a dirt field," said league founder Cathy Smith. "But power wheelchairs and dirt don't mix."

Smith helped raise some of the half-million dollars in private and county funding needed to build the field in 2004.

She said she gets goosebumps whenever she watches the young players come across home plate. "The grin and smile on their faces just says it all."

Coach Tom Estes joined the program eight years ago with his now-15-year-old son, Justin, who has cerebral palsy.

Estes noted that some of the players, like his son, use a wheelchair, but others with autism, Down syndrome and multiple sclerosis are ambulatory.

During a game, the children are paired with young helpers from another local baseball league.

No special skills are required to participate, Estes said. "If we have to help them hit, help them run, help them catch, we are simply here to let them play baseball."

The coaches have taken extra precautions to make sure no one gets hurt.

The players wear batting helmets, and a coach feeds large, softball-sized rubber balls into a pitching machine to control the direction.

There are no umpires, and no one really keeps score. "We have a lot of tie ball games," Estes chuckled.

The games are short, just two innings, but everyone gets to play.

"It's not about competition as much as it is about the ability to just do what other kids do," said Mike Lawless, Morgan's father.

He said his daughter looks forward to the games all week.

So does Estes' son. "Until you get involved, you don't realize the closed life they live," Tom Estes said.

Being part of the team gives the players a sense of independence and self control and gets them outside in the fresh air, he said.

"They're out here doing the same thing as the other kids. They really don't do that on a normal basis."

The weekly games also give the kids something to brag about in school on Monday morning, Estes said. "They hear everyone else talking about it...and my son can say, 'Yeah, I hit a home run yesterday, too. It was great.' "

Justin Estes seemed to take all the attention in stride. And what does he think is the best part about playing baseball? Pointing past his wheelchair to the smooth surface of the field, he said simply, "No ruts."

All About Cerebral Palsy • Disabilities • Baseball