LONDON, England (CNN) -- When HIV-positive Winnie Sseruma was invited to speak on the subject at the United Nations in New York last June, she never expected that her condition would prevent her from obtaining a visa. 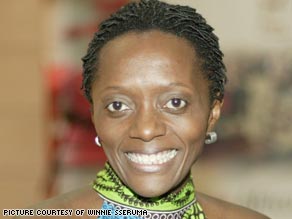 HIV positive Winnie Sseruma was repeatedly questioned before being allowed into the United States.

Winnie Sseruma has been living with the disease for over 20 years. Preparing for her trip, UK-based Winnie discovered that the United States was one of 70 countries worldwide that either banned or restricted inbound travel for people with HIV.

"I was told I needed to come to the U.S. embassy for an interview and bring a doctor's letter stating I was fit to travel," Sseruma, HIV coordinator for charity Christian Aid, told CNN.

"At first, the embassy told me that the first available appointment for my interview would be at a date past the U.N. High-level Meeting I was meant to attend."

Only when the U.N. intervened on Sseruma's behalf was she granted an earlier interview date.

Sseruma was relieved when she finally received her visa on time. But the hurdles were far from over. At the airport in New York, Sseruma was detained twice for further questioning.

"It was so humiliating," Sseruma said. "The immigration officers were asking me very personal questions about my health."

A month after Sseruma's ordeal, the U.S. Senate passed the re-authorization of President Bush's Emergency Plan for AIDS Relief (PEPFAR), including an amendment to the ban on travel and immigration for HIV-positive non-citizens.

But the United States travel ban still remains in effect, and will continue to be the law until the Department of Health and Human Services (HHS) modifies its regulations. Fifty-eight Members of Congress have sent a letter to the HHS, urging them to take action.

Russia also places restrictions on travelers with HIV. Affected visitors are not permitted to stay in the country for more than three months.

Anyone applying for a visa for long-term stay must present a certificate stating that they are HIV negative.

The Russian embassy's spokesperson in London told CNN no changes to the ban were currently being considered and declined to comment further.

Crusading against these bans is "Ctrl.Alt.Shift," a UK-based organization that attempts to engage youth to combat global and social injustices.

The organization argues that there is no public health rationale for "restricting liberty of movement or choice of residence on the grounds of HIV status."

Are these laws outmoded? What do you think? Tell us in the Sound Off below.

The fight against stigmas associated with HIV and AIDS has been widely adopted by the organization's young members. Many are joining Ctrl.Alt.Shift's protests across London.

Last week, following two protests at the embassies of Saudi Arabia and South Korea -- both countries ban HIV positive travelers from entering their borders -- the organization launched its third protest in front of the Russian embassy in London.

"The level of proliferation of the HIV virus in countries that do not implement bans on HIV travelers is proof that these bans have no impact whatsoever, except for reinforcing the stigma," said Neil Boorman, Ctrl.Alt.Shift's project manager.

Boorman told CNN that the bans and restrictions further the spread of the epidemic by driving the issue underground and force people to lie about their health on visa applications.

Tinchy Strider, a 22-year-old British rap artist, was also present at the protest.

"I'm here because many young people are not aware of these issues, but if they knew these bans existed, they would want to do something about it," Tinchy explained.

Eighteen-year-old Sian Anderson agrees. Anderson believes it is bad enough to live with HIV and that these regulations make life "even harder." "Some people are completely not at fault, they might have gotten the virus through blood transfusion and Russia doesn't take that into consideration," Anderson said.

"Science has moved on from the days where HIV was an unknown virus. Now the world needs to move on too," Sseruma said.