LONDON, England (CNN) -- Cholera is caused by becoming infected with a bacterium called vibrio cholera. It's a disease that affects the bowels and in its most severe form is characterized by acute watery diarrhoea that can lead to immediate death through severe dehydration and kidney failure. 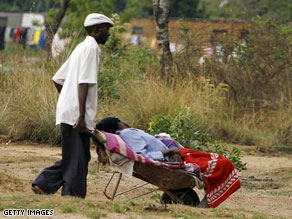 A man from Zimbabwe wheels his sick relative to a cholera clinic.

Almost 12,000 people have contracted cholera since August in Zimbabwe, and the outbreak threatens to kill even greater numbers as the water situation becomes more desperate.

With the world's eyes on Zimbabwe where it is estimated that more than 500 people have already died , many myths and misconceptions abound about cholera.

--Unlike other diarrhoeal diseases, cholera can kill a healthy adult within hours.

--Seventy-five percent of people infected with cholera do not exhibit any symptoms.

--People who have HIV or are malnourished have a greater risk of dying from cholera than others.

--The disease is mostly spread through contaminated water and food supplies.

--The belief that cholera epidemics are caused by dead bodies after a disaster is false.

--Cholera remains a problem in almost every developing country

--If untreated, as many as one in two people may die.

--The true burden of the disease is grossly underestimated as not all cases are reported.