ATLANTA, Georgia (CNN) -- Sada Jacobson may be a world champion fencer with three Olympic medals, but dressed in a T-shirt and sweats, she looked like any other student getting a lesson at the gym. 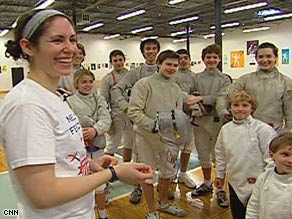 She grabbed her saber, pulled down her mask and started sparing with her long-time coach, Arkady Burdan, at the Nellya Fencers facility in Atlanta, Georgia.

"I've been doing this for 10 years," remarked Jacobson, 25, a first-year law student at the University of Michigan in Ann Arbor. "I never anticipated that this is where my life would take me, and it has been an amazing trip."

This year alone, that trip has taken her to competitions around the world from Algiers, Algeria, to Havana, Cuba, and eventually to Beijing, China, where she claimed two Olympic medals.

Watch Sada Jacobson on the move »

About a dozen young fencers gathered around her during a break from their own lessons to take a close look at Jacobson's silver and bronze medallions.

She passed around another bronze medal that she earned at the 2004 Olympics in Athens, Greece.

Jacobson isn't one to brag, but she's happy to serve as a role model for the next generation of competitive fencers.

She said all it takes to be a champion is "a little hard work, a little luck and some guidance."

Jacobson was inspired to pursue fencing by her own father.

David Jacobson was a member of the 1974 U.S. National Fencing team. Her mother and two younger sisters also participate in the sport.

She blushed when her father stepped into the group of children admiring her medals and reminded them that Sada "started out just like you guys."

Sada Jacobson played down her abilities.

"The beauty of this sport is that anyone can do it," she said. "It's such a mental game that you can use any kind of physical attribute to your advantage."

There are three types of fencing: epee, foil and sabre. Jacobson specializes in sabre.

"Sabre is analogous to a sprint," she explained. "It's very fast, very powerful. It's over very quickly, and you have to put a ton of energy into changing your momentum."

While preparing for the Olympics, Jacobson spent countless hours cross training and working on agility exercises.

Unlike other sports, Jacobson called fencing an asymmetrical workout. "You are constantly in an unnatural body position," she said.

"It's very lower-body specific, so you need really strong legs, but you also need to be very quick and light on your feet," she noted.

The physical preparation was only part of her focus. She also studied countless videotapes of her opponents in competition in an effort to mentally outsmart them.

Burdan, her coach, described the sport as a form of "physical chess."

He said that Jacobson has outstanding technical skills but that she's also one of the best fencers in the world because she uses her brain to strategize during a match.

That's helped her during the past five years as she captured medals in more than two dozen World Championship, World Cup and Grand Prix competitions.

She arrived at the Beijing Olympics ranked No. 1 in the world.

When she returned to Atlanta after the Olympics, the entire team from the Nellya club was there to greet her at the airport.

Seeing that kind of hometown support "was a truly amazing feeling," she said.

One of her admirers is Matthew Tennant, 12, a budding fencer. He knows that it is going to take a lot of hard work and practice to match Jacobson's accomplishments.

"It's kind of cool that she's been in the Olympics," he said. "You know, it's not every day you get to meet a famous person."

Jacobson may be famous but not enough to forget where she got her start or to know when it's time to hang up her saber.

"I'm retiring," she announced. "My coach thinks I'm going to make a comeback, but I'm committed to doing some other stuff."

The other "stuff" includes plans to get married next year and finishing law school.

"I enjoy coming back and seeing everyone and fencing for fun," she said. "But I think this is it for me."