First U.S. face transplant to be made public

(CNN) -- The Cleveland Clinic will announce Wednesday the successful completion of a near-total face transplant surgery, a clinic spokeswoman told CNN on Tuesday. 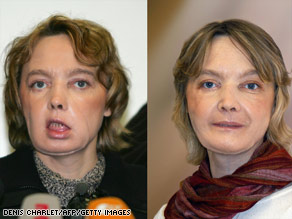 In the surgery -- which was conducted two weeks ago by a team of eight surgeons at the Cleveland, Ohio, hospital -- 80 percent of the trauma patient's face was transplanted, the spokeswoman said. The forehead and chin were left intact.

The surgery was the first such operation done in the United States. In 2005, French doctors performed the world's first partial face transplant on a 38-year-old woman who was disfigured when she was attacked by a dog.

"I hope the successful operation will help other people like me to live again," said Isabelle Dinoire, the French woman who received a nose, lips and chin.