Relax -- Your holiday health concerns may just be myths

The holiday season is a great time for family, friends, and well, old wives' tales: Who hasn't been told to wear a hat because you lose the most heat from your head? Or to keep kids away from poisonous poinsettias? 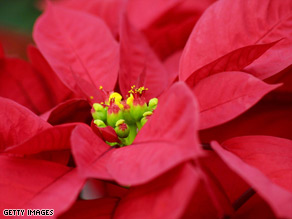 Poinsettias are not as toxic as you might think, a new report says, although they may cause skin irritation.

There are some real holiday health hazards, but other much-discussed fears appear to be false, say two researchers. Their analysis, published Wednesday in the British Medical Journal, suggests that your mother's -- or even your doctor's -- advice may not always have rock-solid evidence to back it up.

Dr. Rachel Vreeman, M.D., and Dr. Aaron Carroll, M.D., professors of pediatrics at the Indiana University School of Medicine, in Indianapolis, Indiana, set out to show that even widely held medical beliefs require scientific examination. They pored over medical literature databases, and in some cases, conducted Google Internet searches, to find evidence that supported or refuted these ideas. Health.com: 11 holiday health hazards to avoid

Here's what they found.

Release the candy canes! In at least 12 placebo-controlled studies, children who were given different amounts of sugar reacted no differently than those who had none, report Vreeman and Carroll. Even research looking at kids with attention deficit hyperactivity disorder or those who were considered sensitive to sugar found no evidence of behavioral change.

Interestingly, in one study when parents thought their children had been given a sugary drink (it was actually sugar free), they perceived their behavior as more hyperactive.

We do get energy from sugar, says Carroll, so it doesn't take a huge leap to believe that too much sugar would create too much energy. While sugar does seem to be associated with events that may trigger misbehavior, science shows that sugar is not the real culprit. "A lot of occasions when kids are exposed to sugar are when they are most likely to be super excited, running around, and acting out," he explains. "They get more ice cream and candy often at times when they are at parties, getting presents, and seeing friends, and these factors all contribute."

Other research has hinted that artificial dyes and preservatives may be a problem, not sugar. Health.com: Are holiday toys safe?

Myth: Suicides increase during the holidays

While the holiday season is a joyful time for many, it can also be stressful or depressing for those with family tensions or no family at all. However, a 35-year study on Minnesota residents found that suicides did not increase on or around Christmas or any other major holidays, including birthdays, Thanksgiving, or the Fourth of July. Research from all over the world, in fact, shows that suicides are actually more prevalent in warm, summer months -- a pattern that scientists can't quite explain. While suicidal thoughts should be taken seriously at any time of year, there's no reason to think that this month is especially dangerous.

Even though public health officials have reported that poinsettias are safe, many people believe they are toxic plants. However, in a 1996 analysis of 22,793 poinsettia cases (reported to the American Association of Poison Control Centers), none revealed significant poisoning.

Edward Krenzelok, Pharm.D., director of the Pittsburgh Poison Control Center and Drug Information Center at the University of Pittsburgh (and lead author of the 1996 study) in Pennsylvania, says that it is possible to become ill by consuming a large amount of the plant -- but it's also rare, even in small children and pets. "A new Christmas puppy or a playful black Lab may decide to make the plant the focus of play and ingest a large quantity," he adds. "However, I would expect nothing more than vomiting or diarrhea."

Some studies suggest that poinsettia sap can be irritating to the skin, and, of course, any adverse reactions to plant ingestion should be reported to poison control centers. Health.com: How to care for problem skin in the winter

Myth: You lose most of your body heat through your head

This oft-repeated factoid probably originated with an old military study in which scientists put subjects in Arctic survival suits (but no hats) in extremely cold temperatures, and found that they did indeed lose a great deal of heat through their heads.

However, experts say that had this experiment been performed with subjects wearing swimsuits, they would have lost heat evenly across all exposed body surfaces -- and no more than 10 percent from the head specifically.

"We often hear parents say that as long as their kids are wearing a hat, they feel that they're sufficiently dressed," says Vreeman. "Of course they should bundle up for protection from the cold, but they should be equally concerned about gloves and boots as well." Health.com: America's healthiest gifts for 2008

Holiday festivities provide people with many opportunities to indulge in large meals and lots of desserts at all times of the day. But the commonly held belief that eating before bed causes more weight gain than eating at other times of the day isn't supported by research. Several studies promote the weight-control benefits of eating breakfast and eating meals at consistent times, but that's only because they help people limit their overall intake of daily calories, the study authors report. Health.com: Survive the holidays without gaining weight

"The time of day a person eats is not as important for overall weight gain as the amount of calories eaten during the day," agrees Jeannie Gazzaniga-Moloo Ph.D., R.D., a spokesperson for the American Dietetic Association. "However, the danger in eating late at night is that it tends to be mindless eating, of calorie-laden foods." Avoid your favorite go-to comfort foods before bed, she suggests, but don't fret if your regular dinner gets pushed back several hours.

Myth: You can cure a hangover

Sorry, but there's no magic bullet for this one. Internet searches reveal seemingly endless options for hangover cures, the authors report, from aspirin and bananas to prickly pear and Vegemite. But no large, well-designed studies have found that anything but time -- and drinking water to treat dehydration -- can ease the aftermath of too much alcohol consumption. Health.com: Holiday sleep saboteurs that may disrupt your schedule

The authors' analysis -- which was not a systematic review -- was performed mainly for entertainment reasons, although the authors stress that there is a larger lesson to be learned.

"With the Internet today, it's easier to find good information but it's also just as easy to find bad [information]," says Carroll, and advice is often passed by word of mouth, even by medical professionals. "Doctors spend a lot of time simply doing things they've been told to do or things they've learned in the past."

If these holiday myths can be dispelled, he says, then more serious health advice might be disproved as well.

"Plus," adds Vreeman, "we don't want people going outside with just hats and no other clothing."

All About Weight Loss • Candy • Food and Cooking • Holidays