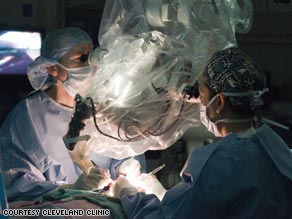 Siemionow and CNN chief medical correspondent Sanjay Gupta talked with CNN's Larry King about the reconstructive procedure and the prognosis for the patient. The following is an edited transcript of the interview.

Larry King: Dr. Siemionow, what caused the patient to need a new face?

Watch a discussion of the transplant procedure »

King: Did you have to find the perfect donor?

Interactive: Learn more about the procedure »

King: So what was the transplant?

Siemionow: Well, the transplant was the transfer of the transplanted face, which included (a) large amount -- about 80 percent of the entire face of the patient. It included skin components, bone components, the entire nose, cheekbones, a palette and upper lip and also included the eyelids -- the lower eyelids.

King: From another doctor's standpoint, Dr. Gupta -- and I know that you're not a plastic surgeon, but a brain surgeon -- what was the most amazing thing about this to you?

Sanjay Gupta: The face is one of the most complicated areas of the body. I mean, it's responsible for your facial expression, your ability to eat, your ability to breathe, your ability to speak, obviously. Being able to take all those really, really functional areas that are made up of so many nerves, so many blood vessels -- not to mention the cosmetic aspects of it -- and making it all come together and work in some sort of functional form is pretty remarkable.

King: Doctor, has the patient seen her new face?

King: How long did it take (to do the surgery)?

Siemionow: It took 22 hours -- 22 hours of many team members of different subspecialties working together, from one afternoon one day into the late afternoon the second day.

Gupta: It strikes me that you found the perfect recipient, someone who's a good candidate for this operation. Four years, though, it took, Dr. Siemionow. Is that how rare this type of procedure will be?

Siemionow: Yes. Well, you know, we discussed it very extensively, that you want to be sure that in our approach we were looking only at potential candidates who would be a patient who had already exhausted all conventional means of reconstruction. I think it's very important because you would like to be sure that the patient is not undergoing such a serious procedure without being helped in conventional means before.

However, it is very difficult to reconstruct certain parts of the face, including, for example, lips or including eyelids. Even reconstruction of the entire nose is difficult.

There are plastic surgeons who are doing wonderful reconstructive procedures, but they are also done in several attempts. This takes time and patients suffering and the results not always are presentable.