Robbed by rare virus, boy gets his voice back

KENNESAW, Georgia (CNN) -- Singing "Frosty the Snowman" and "Jingle Bells" may not seem like a big deal to most third-graders, but for Joey Finley, 8, doctors say it's a miracle. 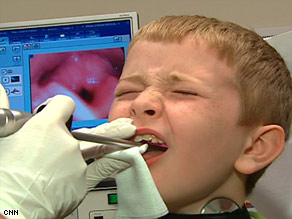 Joey Finley, 8, suffers from a rare condition that can prevent people from speaking normally.

The blond, freckle-faced boy was unable to speak in a normal voice until about a year ago.

"I thought I would sound bad," he said.

Joey suffers from a rare virus that can get into the cells of the voice box.

"He has a condition called recurrent papillomatosis," explained Dr. Steven Sobol, director of pediatric otolaryngology at Emory University School of Medicine in Atlanta, Georgia. "It causes growths like warts that you would see in other parts of the body."

Sobol said lesions in RRP (for the condition's full name, recurrent respiratory papillomatosis) are caused by the human papilloma virus, or HPV, the same condition that causes cervical cancer.

An estimated 20,000 children and adults in the United States suffer from the disease.

Not only can RRP rob patients of their ability to speak normally, it can create serious breathing problems if left untreated.

"It can be rapidly fatal for somebody who completely blocks off their airway," Sobol said.

"Try to imagine breathing through a coffee stirrer. That's what those children breathe like when they first come to our attention," Sobol described.

Experts aren't sure exactly why some people contract the virus, but Sobol believes that "it's a combination of genetic factors and exposure either in utero or during early childhood."

His mother, Melanie Finley, recalled that when Joey was a year old, he would strain his neck muscles every time he tried to talk.

She took the child to several doctors before they finally met with Sobol, who diagnosed the condition.

Finley was relieved to get some answers, but Joey's medical journey was just beginning.

Sobol reported that from the age of 4, Joey endured 16 surgeries to remove the growths from his vocal cords.

"When I first met Joey ... he couldn't breathe," Sobol recalled.

Treating the boy took time, the doctor explained. "Even though you remove the parts of the virus that you can visually see ... the virus will tend to regenerate the growths, so over time ... days or months, it will cause the growths to reoccur and obstruct the airways."

RRP is not passed through casual contact, and there is no cure.

Sobol is hopeful that one day, a vaccine may be used to help prevent the development of the disease.

He said Gardasil, a series of three shots offered to adolescent girls for the prevention of cervical cancer, may be one of the drugs used to stop the spread of RRP.

Ear, nose and throat specialists end up spending a lot of time with their patients with this condition, Sobol said.

"I tell my parents once we diagnose a child, 'We're going to get to know each other really, really well. Coming to see me is like going to the dentist.' "

But there's an obvious difference between removing laryngeal warts and cleaning teeth.

"Certain children have a very tough time with this," Sobol acknowledged. "They're in the operating room every two weeks to save their life. ... Then, there are children like Joey who have the disease when they're very young and grow out of it by the time they are older adolescents or teenagers."

Though he's required fewer operations during the last couple of years, the surgeries altered Joey's voice. He used to joke with his doctors that he had "frogs" in his throat.

Between all the procedures that caused him to miss school and his shyness about his voice, Joey was reluctant to socialize.

His mother said he was teased by his preschool classmates. "There is nothing worse than being different," she stated.

Joey's outlook started changing shortly after he was assigned to work with Edie Hapner, a speech language pathologist at Emory University School of Medicine.

"When Joey came in, he was using compensatory muscles to make his voice," Hapner said. "He had had so many surgeries on his vocal cords, he didn't even know how to use them anymore."

It took a little over a year, but Hapner is credited in part with giving Joey his voice back.

She taught him how to imitate funny sounds.

Hapner said it didn't take long in their few first sessions together before Joey was able to make normal sounds.

"I heard a sweet little high-pitched voice, not that 80-year-old man voice in a 5-year-old body," she said.

Melanie Finley remembered: "I bawled when I heard his real voice."

Hapner called Joey's recovery a miracle. "To see someone like Joey, who every day is getting in trouble for talking or singing and is now participating in after-school activities that he would not do before because of his voice, it's incredible."

And what's it like to sing Christmas songs with classmates? "I usually was afraid to sing, and now I'm not," Joey said. "You actually get to have fun and use your voice."