NEW YORK (CNN) -- A good friend of mine recently learned she has breast cancer. Even though I spend most of my time writing for a living, I was at a loss for the right words to comfort her. 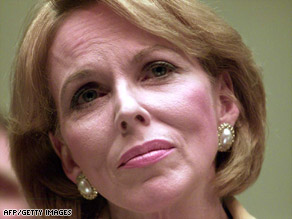 It wasn't until I interviewed Dr. Bernadine Healy, a brain cancer survivor, that I discovered there is such a thing as cancer etiquette.

"I found as a patient, sometimes people are awkward, and they'll say the strangest things to you," said Healy, former head of the National Institutes of Health and the American Red Cross.

She recounted in her book "Living Time" a conversation with a female acquaintance who declared, "You look great. It's amazing how good you can look when you're dying."

In another instance, Healy recalled a woman grabbing her hair and feeling the texture and asking, "Is that your hair, or is it a wig?"

Healy suggested that friends and loved ones can be more sensitive by imagining for a moment that they're the patient. "It's not bad to say wait a minute -- what would I want someone to say to me?"

She recommended starting out with some tenderness. "This is a tender time," she said. "It can be, 'Hey, you know you're great. I care about you. I love you and I'm here for you.' "

She cautioned people to "think before they speak" to someone with newly diagnosed cancer. "One thing you don't want to do is instantly assume it's terminal. ... Often there is a feeling that people are going to write them off, or they're going to count them out." Health Minute: More on cancer etiquette

In her book, Healy wrote, "Banish the following from your vocabulary: terminal, incurable, hopeless and salvage."

"How you think and talk will influence how you relate," she said.

In her new book, "Five Lessons I Didn't Learn From Breast Cancer (and One Big One I Did)," Lewis scolded what she called the attitude police.

"They are your friends and family, very well-meaning people, who tell you to be careful and upbeat, but it puts you in a defensive position," Lewis said.

Like Healy, Lewis said she encourages people to think before they say something inappropriate.

She said she believes it is even more important to spend time listening to a cancer patient rather than doing all the talking.

Lewis said that is especially true when it comes to offering advice.

"If you're not a doctor, don't tell me how seven of your friends were treated, because you don't know my specific situation," Lewis said.

She said she prefers positive conversations. "I liked hearing that I seemed like myself again. It meant that I was in control, and I was able to believe it," she said.

If you want to help a friend, Lewis recommended making specific gestures that are thoughtful.

Healy added if you're uncertain how your words or actions will be received, then it may be better to stick with something simple. She said, "A hug or 'thinking of you, dear friend' note can mean a lot, too."