LOS ANGELES, California (CNN) -- The AIDS epidemic among African-Americans in some parts of the United States is as severe as in parts of Africa, according to a report out Tuesday. 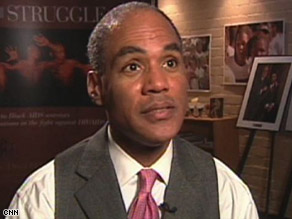 "Left Behind - Black America: A Neglected Priority in the Global AIDS" is intended to raise awareness and remind the public that the "AIDS epidemic is not over in America, especially not in Black America," says the report, published by the Black AIDS Institute, an HIV/AIDS think tank focused exclusively on African-Americans.

"AIDS in America today is a black disease," says Phill Wilson, founder and CEO of the institute and himself HIV-positive for 20 years. "2006 CDC data tell us that about half of the just over 1 million Americans living with HIV or AIDS are black."

Although black people represent only about one in eight Americans, one in every two people living with HIV in the United States is black, the report notes.

• In Washington, more than 80 percent of HIV cases are among black people, that's one in 20 residents. iReport: AIDS in Washington's older population

"Five percent of the entire population (in DC) is infected... that's comparable to countries like Uganda or South Africa," Dr. Anthony Fauci, director of the National Institute of Allergy and Infectious Diseases, told CNN for the recent "Black in America" documentary.

According to this report, if black Americans made up their own country, it would rank above Ethiopia (420,000 to 1,300,000) and below Ivory Coast (750,000) in HIV population. Both Ethiopia and the Ivory Coast are among the 15 nations receiving funds from the President's Emergency Plan For Aids Relief. The United States has given about $15 billion to PEPFAR nations in the past five years. Tell us: What's your experience being black in America?

The Black AIDS Institute says it's not criticizing the federal government for helping poorer countries cope with the AIDS epidemic. Rather, it's saying the "AIDS epidemic [in the U.S.] is not getting the kind attention that it merits."

Watch more on the new report on AIDS and African-Americans »

Watch: AIDS in the black community »

Wilson says more needs to be done to prevent the spread of HIV in this country. The report states that the U.S. government "increased spending on HIV prevention, treatment and support programs for low-income countries dramatically, at the same time that domestic remained all but flat."

According to the Kaiser Family Foundation, domestic prevention efforts make up the smallest part of the HIV/AIDs budget, the 2009 budget request includes $892 million for domestic HIV prevention efforts, the same as in 2008. iReport.com: Spelman women discuss HIV and AIDS

In this report, Wilson and others urge the federal government and private foundations to significantly increase funding for HIV prevention and treatment programs. The report also calls on international agencies to hold the U.S. government accountable for failure to address HIV/AIDS epidemic in its own country (despite lauding it for its PEPFAR efforts). It also urges black communities in the United States to fight the stigma and overcome prejudice associated with being infected with HIV.

"Peggy" found out 10 years ago that she was HIV positive. The fact that she's asked us to not use her real name is an example of the stigma that's still attached to having the virus that causes AIDS, especially in the African-American community.

"I don't really talk to many other people about it, 'cause I guess maybe, they don't want to talk," says the 27-year-old Lake Charles, Louisiana, woman. Others like her, she says, are still too ashamed to admit they have HIV. AC 360 Blog: The cavalry is not coming to save us

Marvelyn Brown, 24, of Washington, is more open about her status. She learned she had HIV when she was only 19, after one time of unprotected sex while in a monogamous relationship.

Brown has told her story in a book, "The Naked Truth, " and to CNN in last week's special report, "Black in America." She regularly addresses community groups, trying to help educate blacks about the risk of of HIV and AIDS.

The report was funded by the Ford Foundation and the Elton John AIDS Foundation.

All About HIV and AIDS • Anthony Fauci