ATLANTA, Georgia (CNN) -- There are more new cases of Americans infected with HIV, the virus that causes AIDS, than previously believed, the Centers for Disease Control and Prevention said Saturday. 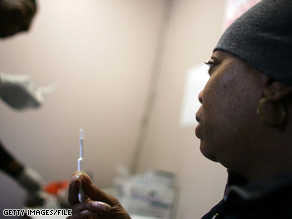 A woman uses the Oraquick rapid HIV testing device at a New York health clinic in 2006.

About 56,000 people became infected with HIV in the past year, which translates to about 40 percent more cases than officials had estimated, said Dr. Kevin Fenton, director of the CDC's National Center for HIV/AIDS, Viral Hepatitis, STD and TB Prevention.

Previous CDC estimates suggested about 40,000 new people were infected each year. But those estimates used "limited data and less precise methods," said the center, which is now using technology capable of determining when someone was infected.

The new method can indicate whether someone has been infected with HIV during the previous five months, rather than relying on statistical models.

Diagnosis of HIV can occur years after infection, he said.

"The fact that 56,000 Americans each year are contracting HIV for the first time is a wake-up call for all of us in the U.S.," Fenton said. iReport.com: Are you living with HIV infection? Share your story

"These numbers are a scathing indictment of how profoundly U.S. and CDC HIV prevention efforts have failed," said Michael Weinstein, president of AIDS Healthcare Foundation, which calls itself "the nation's largest provider of HIV/AIDS medical care."

Weinstein called on the United States to appropriate $200 million for the testing of 10 million people over the next three years.

"Identifying all those who are infected and linking them to treatment is the only way to break the chain of new infections and begin to address the nation's runaway epidemic," he said.

In the United States, more than 1 million people are living with HIV, and about one-fourth of them are unaware they have the virus, the CDC said.

See a breakdown of HIV cases in the U.S. »

According to the report, 53 percent of new HIV infections occur in homosexual or bisexual men. African-Americans account for 45 percent, or 25,000 new cases annually, meaning they are seven times more likely to contract HIV than whites.

On Tuesday, the California-based think tank Black AIDS Institute released a report that suggests that the AIDS epidemic among African-Americans in parts of the United States is as severe as it is in parts of Africa.

If African-Americans made up their own country, it would rank 16th globally in the number of people living with HIV, said Black AIDS Institute founder Phill Wilson.

The number of people newly infected has remained relatively stable since the late 1990s, and the more accurate estimate does not change that, the CDC said.

Wilson said the numbers were especially startling considering that the United States lacked the infrastructure to handle 40,000 new HIV cases each year.

"We do not have a national AIDS strategy," said Wilson, suggesting that the new numbers should translate into a "national call to action."

Fenton acknowledged more needs to be done, but said the CDC was bound to operate within "the president's budget."

Ideally, he said, a response to the epidemic would include more investment in prevention efforts. The CDC will work with the Department of Health and Human Services, along with other public and private organizations, to "add to the federal pot," he said.

"Every year, more than 15,000 people are dying from this disease, and AIDS is a major killer for some of our minority communities," he said.

"The key thing we have to focus on now is what, how and when do we begin to enhance the prevention responses to end this epidemic."

Fenton and Wilson said removing stigma and discrimination are necessary first steps. People need to be educated about how they can prevent infection and, if they do get HIV, how they can get tested and treated as soon as possible.

Since the mid-1990s, antiretroviral therapies have turned HIV and AIDS into more of a chronic illness rather than a death sentence. Until a vaccine is developed, getting infected people on antiretrovirals as early as possible would improve their long-term outcome.

The new data is scheduled for publication in the peer-reviewed Journal of the American Medical Association. The report's release is meant to coincide with the opening Sunday of the the biannual International AIDS Conference in Mexico City, Mexico.

All About HIV and AIDS • Centers for Disease Control and Prevention