Teen drivers with ADD a problem on the road

It was hard to miss the bright yellow Student Driver bumper sticker on the back of the car driven by Tosha Mulligan. 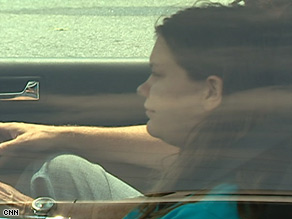 Tosha Mullgian, 19, has attention deficit disorder. She says her mind wanders when she drives.

Getting a driver's license is a rite of passage for many teenagers, but the process was a bit more challenging for 19-year-old Mulligan of Acworth, Georgia. She has attention deficit disorder.

When she gets behind the wheel, she said, "Sometimes my mind wanders off."

She's not alone. Researchers reported driving can be a serious problem for teens with ADD and attention deficit hyperactivity disorder. Motor vehicle accidents already are the leading cause of death among teenagers in the U.S., according to the National Highway Traffic Safety Administration. Experts such as Russell Barkley say ADD and ADHD compound the problem.

Barkley, a psychiatry professor at the Medical University of South Carolina, is a widely recognized expert on ADD and driving. He has investigated the topic for 15 years and conducted a half-dozen studies, some of which have been published in peer-reviewed journals.

Teen drivers with ADD or ADHD "are impulsive, highly distractible and clumsy, can't pay attention to the roadway and they get bored easily," he said.

Mulligan's driving instructor, Jerry Thielemann of Freedom and Mobility Driver Training and Evaluation in Marietta, Georgia, experienced that firsthand. He works with teenagers with ADD three to four times a week.

"A person with ADD pays attention to someone walking down the street rather than a car coming toward them," Mulligan said. "They don't know what to focus on."

Barkley sees speeding as a key problem. "In general, people with ADHD speed four times more often than those without ADHD," he said.

In all three instances, Barkley pointed to the impatient and impulsive nature that is common among people with ADD or ADHD.

Chris Zeigler Dendy, author of "Teenagers with ADD and ADHD," raised a son and a stepson with the condition.

"We were worried sick about our kids when they started driving because both had ADHD," Dendy recalled. "They both started getting speeding tickets and having car wrecks. One of them even had his license suspended."

That was nearly 20 years ago. Today, Dendy said, she understands what was behind their troubles.

"I think the good news is that parents today are so much better informed than we were, plus laws have tightened up so you get one ticket or step out of line and your license is gone," she said.

Dendy credited proper medication with helping get her sons back on track.

"Research tells us that with medication they are more likely to pay attention to road signs and less likely to have road rage," Dendy explained.

She worried about parents who may not be as vigilant when it comes to monitoring their teen's driving behavior, especially during high-risk times.

"One is after school from 3 to 6 and the other is on weekend evenings," she said.

She mentioned those are often the hours when medication starts to wear off or when teens may be more likely to skip a dosage.

Barkley acknowledged the parents who decline to medicate their children who have ADD or ADHD, but he believes "Medication is more effective than any other treatment."

Barkley also cautioned that people with ADD are more sensitive to the effects of alcohol and are unable to drive safely after drinking.

He told teens to put away their cell phones, MP3 players and other items that might distract them while driving.

Barkley suggested parents closely monitor their teenagers and provide sign-in and sign-out sheets in the garage to track their whereabouts.

Dendy eventually drew up a contract with her children, spelling out specific rules and expectations for driving the family car.

Dendy and Barkley both recommended that teenagers with ADD or ADHD stay in a learner's permit program longer, at least a year, and put off getting their license until they have more experience behind the wheel.

That's what Tosha Mulligan did. She finished her last driving lesson the day before she left for her freshman year in college. She passed her driver's test on the first try and got her license.

She said waiting to get her license made a big difference. She said "It kept me focused." She reported no wrecks, no tickets and no problems so far.

All About Attention Deficit Disorders