MONROE, Georgia -- It's just after dawn on a chilly Monday morning. The leaves crunch under Van Lewis' feet as he treks through the woods in rural Monroe, Georgia, clutching a hunting rifle. 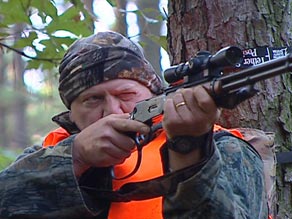 "It's an adrenaline dump the first time you see that monster coming ... toward you," says Van Lewis.

Lewis is breathing heavily as he makes his way to a ladder leaning next to an old pine tree. He then climbs 20 feet to a custom-built enclosed hunting stand and waits for a deer.

That workout, according to some medical experts, may be too much for some hunters to handle.

"I think it's a very significant problem," said Dr. Eric Good, a cardiologist at the University of Michigan Health System in Ann Arbor.

The biggest danger that some hunters face isn't getting hit by a stray bullet or falling out of a tree stand, Good said. It's heart disease.

He appealed directly to those hunters who have known risk factors such as high blood pressure, high cholesterol and diabetes:

He recommended that people never hunt alone, carry a cell phone and have an exit plan.

Good urged all hunters to see a doctor for a checkup before suiting up in camouflage and heading into the woods. He also suggested they take part in preseason cardio training in a safe environment.

Asked whether he's in good enough shape for the deer season, Lewis chuckled. He noted that he smokes and is trying to lose 25 pounds. He's taking medication to get his blood pressure and cholesterol under control.

But Lewis tried to put aside his health concerns as he focused on spotting his prey.

"It's an adrenaline dump the first time you see that monster coming through the woods toward you," he said. "You almost feel short of breath. You can hear your pulse in your ears, that rapid heartbeat ... and you're wound up."

That particular scenario is what worries Good the most. "Certainly, for people who already have existing or known heart disease, they are at extremely high risk for the stress that this adrenaline rush places. It can trigger a heart attack or even potentially worse a lethal heart rhythm disturbance."

Good's second biggest worry centers on what happens to hunters when they haul their kill out of the woods.

"It's quite strenuous," Good said. "It puts demands on all the muscles of your body, your cardiorespiratory system, and it increases your heart rate and breathing."

Lewis admitted that harvesting a deer can be incredibly hard because of the physical exertion.

"In my situation, there is no rush," he said. "I can move the deer 10, 15 or 20 yards and sit down as long as I want." He often uses an all-terrain vehicle to help make the job easier.

Good's final concern has to do with hunters who start celebrating even before they head into the woods.

"There's a tendency before the big day to sort of party it up," Good said. "Certainly, overexertion during the day compounded with the fact that you had one too many drinks and didn't have enough sleep adds to the stress. All of this together can put you over the edge and at risk for heart problems."

Lewis agreed with the doctor that staying up late and "carrying on" can make a day of hunting more difficult.

Good insisted he isn't trying to ruin anyone's party, but he stressed that all hunters need to know the warning signs of a heart attack.

He cautioned people to look out for "chest pain, jaw pain or arm pain, especially with exertion. Some people, especially those with diabetes, don't feel these symptoms and may only feel sweatiness, nausea and may feel like they're going to vomit."

The first thing you should do, according to Good, is stop moving and sit down. If you're having chest pain and you carry nitroglycerin, "certainly administering that would be important," he said.

Finally, Good stressed the importance of calling for emergency help and getting to the nearest medical facility.

Good concluded that all of this might be avoided if hunters take precautions and think ahead. After all, he said, "we don't want the hunter to become the prey and fall victim to a heart attack."

All About Heart Attacks • Hunting