ATLANTA, Georgia (CNN) -- Maggie O'Connor minces garlic for a Mexican lasagna while across the kitchen Melissa Thornton chops basil for a turkey wrap. 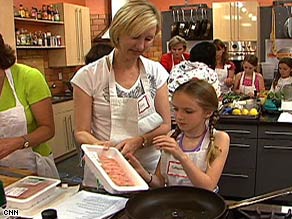 Vicki Bratton, with Catherine, 8, noted that everything moms say, daughters are hearing and processing.

These aren't professional chefs. They're 10- and 11-year-old girls getting a lesson in cooking and healthy eating. They're also learning how to have a positive image of their bodies.

"I think you need to balance things," said Thornton, a fourth-grader from Atlanta, Georgia.

Not only is her mother peeking over Melissa's shoulder as she works, but so is clinical psychologist Dina Zeckhausen, founder of the Eating Disorders Information Network.

She gathered eight moms and their daughters on a recent Sunday afternoon at The Cook's Warehouse in Atlanta.

Zeckhausen's goal is to help the mothers be effective role models, especially when it comes to eating.

"These are just ordinary moms," Zeckhausen said. "A lot of ordinary moms these days have struggled with their own body image. They want to raise healthy daughters. They don't want to pass their own anxieties down to their girls."

The National Eating Disorders Association notes there has been unprecedented growth of eating disorders in the past two decades.

The group estimates up to 10 million Americans suffer from the condition. Ninety percent of those who battle anorexia and bulimia are female.

Zeckhausen urged the moms gathered in the kitchen to eliminate what she called "negative body talk."

"It's important that you don't put yourself down in front of your daughter," explained Zeckhausen. "She has an adult woman's body in her future and she's looking to you in terms of how to feel about that body. She's taking notes whether you know it or not."

Vicki Bratton knows that firsthand. She attended the class with her 8-year-old. "I realized so many things come out of my mouth that I don't expect. Everything we say, their ears are hearing and they are processing it."

Bratton said she was surprised she needed to start worrying about her daughter being at risk for eating disorders at such a young age.

"I hear stories of first-graders who are already afraid of eating cookies because they think they are bad," Zeckhausen said. "I heard of a 5-year-old who wouldn't put on her winter coat because she was afraid it made her look fat."

Zeckhausen put part of the blame on the media and pop culture. "Our daughters are comparing their bodies on the outside to what the girls look like on the Disney Channel and in the magazines. We want to help our daughters base their body image more on what their bodies do for them and how they feel, rather than how they look."

Zeckhausen urged the girls to resist peer pressure, particularly in the lunchroom where she noted some kids push away healthy food in favor of crackers and ice chips.

"If your stomach is hungry and the girl next to you is not eating, what should you listen to?" asked Zeckhausen. "We want to teach the girls to listen to their own bodies."

Kelly O'Connor stood behind Maggie as she chopped the rest of the garlic. As the mother of 8- and 10-year-old girls, she conceded, "I'm already trying to teach them about the dangers of being afraid to eat and making sure when they're hungry it's OK to eat and when they're not hungry just say 'no thank you.' "

"One cooking class may not make a difference, but if we are teaching moms a way of thinking about food and bodies which will help them negotiate what their daughters are going through ... then we are doing something really important."

All About Eating Disorders