Zumba zooms to the top of the exercise world

ALPHARETTA, Georgia (CNN) -- Latin music pulses from the stereo as 40 women jump, shimmy and sway to the beat. 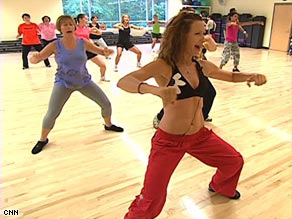 Zumba is the most popular exercise class at one suburban Atlanta YMCA.

It's not a dance club. This is a regular morning exercise class at the YMCA in Alpharetta, Georgia. It's called Zumba.

Part dance, part aerobics, Zumba is an hourlong routine that works almost every muscle in the body.

"It is dance fitness," explained Stephanie Maxim, one of two class instructors. "We teach them moves that you can see on 'Dancing with the Stars': salsa, mambo, cha-cha, and we put it into a group fitness format."

"It's not like a workout," explained Diane Walterstiel, 55, of Alpharetta. "Before I come, I'm tense, but when I leave, I could kiss the world."

Nearly a year after being introduced at the YMCA in suburban Atlanta, Zumba is the most popular exercise offering at the facility.

Alberto Perlman, co-founder and CEO of Zumba Fitness in Hollywood, Florida, wasn't surprised when the concept took off not just in the United States but around the world.

"We turned exercise into a party," Perlman declared. "Zumba broke some of the rules of fitness. We used music in the original form instead of using step counts."

Perlman, whose background is in marketing, teamed up with Colombian dancer and choreographer Alberto "Beto" Perez in Miami in 2001.

"One day, Beto forgot his aerobics tapes, so he played his salsa and meringue songs during class in their original form," Perlman said. "People went crazy. They didn't feel like they were in a class with a drill sergeant."

Perlman said Perez decided to call the exercise Zumba, after the Colombian slang word meaning to buzz like a bee or move fast.

Zumba is now a brand name. Since 2003, Perlman's group has trained 20,000 instructors around the world and sold more than 3 million DVDs on the Internet and through infomercials, he said.

Heather Bleakman teamed up with Maxim to teach the Georgia YMCA session. She called the class a form of therapy.

"We see women change," she said. "We see their faces light up."

Bleakman stood at the front of the room and offered a high-impact version of Zumba for those who could keep up while Maxim focused on a slower low-impact routine.

Maxim warned participants at the beginning of class to modify the exercise to fit their needs. She added that wearing proper footwear is one of the best ways to guard against injury.

"In Zumba, we do a lot of pivoting, so you've got to have a shoe that has more of a flat base so you can move, or you'll feel the torque in the knee," Maxim cautioned.

Lilieth Burke, 48, of Alpharetta started attending Zumba classes a year ago and kept coming back because she appreciated "the simple composition of dance moves."

Unlike other exercise workouts she's tried, "Zumba is not a punishment," she said.

All About Exercise and Fitness