PICHER, Oklahoma (CNN) -- In a year marked by massive flooding, deadly tornadoes and blazing wildfires, Tad Skylar Agoglia has never been needed more. This week, he's on the scene in Iowa. 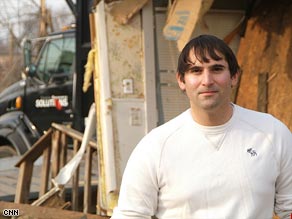 Agoglia is the founder of The First Response Team of America, his self-funded, nonprofit, nomadic, four-man cleanup crew that provides immediate, emergency aid to areas hit by disasters.

Since May 2007, the team has helped thousands of victims at 15 disaster sites across the United States and has rapidly become a recognized name in first responder aid.

"The most critical phase of a disaster is the first few days," Agoglia says. "That's when you have to find the people that are in desperate need of medical attention, food, water."

Agoglia bases that conclusion on more than four years of on-the-scene experience. When his company, Disaster Recovery Solutions, was hired to clean up after storms like Hurricane Katrina, he noted that days -- even weeks -- routinely passed before authorities began establishing recovery operations.

Local response officials were often debilitated by a loss of resources, and aid organizations arriving early on the scene with water, medical care and food were unable to reach those in need because of road-blocking debris or flooding.

"I got this crazy idea to use one of my cranes to respond immediately to a disaster and just open up roads," Agoglia recalls. "So I deployed equipment immediately. And sure enough, there was a need."

During a year in which the country has suffered unprecedented storm numbers and damage, needs are only escalating.

"Initially, I thought I'd respond to one or two storms a year for free," says Agoglia. "But the demand has been so great, I couldn't say no."

Agoglia has continued to develop his arsenal of equipment to meet that demand. The First Response Team consists of more than $1 million in specialized machinery able to adapt to the various challenges of disaster sites.

Each of two 75-foot max trucks can hold up to eight average dump trucks' worth of debris and has a high-speed crane with interchangeable heads that can lift, crush and cut its way through collapsed buildings in 20 minutes to an hour.

"Especially when little towns get hit, there's not much assistance for them," Agoglia says. "With my equipment, I can come in and clean up the whole town in two days."

Agoglia hauls a multi-terrain hovercraft, dirt bikes, satellite phones with GPS tracking, a huge generator and a large water pump. Soon, he'll add a fire truck and a complex satellite database to connect those suddenly homeless with separated loved ones.

Crisscrossing the country, responding to every type of disaster, Agoglia and his team understand the realities of separation all too well.

"I actually had an apartment, but it was a waste. I was never even there," says the Long Island, New York, native. "So, I took those resources and put them into this team."

Watch Agoglia and his team in action »

His inability to turn away from this mission has also meant a halt to Disaster Recovery Solutions' contractual work, with Agoglia's personal savings solely funding The First Response Team so far. With the escalating cost of fuel, Agoglia's monthly operational costs have rocketed to $45,000. Yet with only a year's reserve left, the seminary grad remains undaunted in his leap of faith.

"I used to worry about money. I'd sit down with a yellow notepad and calculator and run the numbers, but I don't do that anymore," Agoglia says. "With the experiences that I've had in these communities, and working with these wonderful people all over America, how can I not help?"

Ultimately, Agoglia envisions multiple teams covering the country, funded by corporate and federal sponsors, and eliminating the perpetual dilemma faced by his own team when choosing between communities in need.

"We need more teams. There's no question about it," he says. "America deserves this type of response."

All About Accidents and Disasters • Disaster Relief • Hurricane Katrina