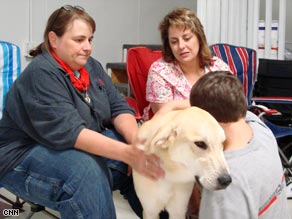 Karen Shirk's nonprofit 4 Paws for Ability has placed 319 service dogs with people with disabilities since 1998.

That's how Karen Shirk explains the ability of service dogs to help children suffering from autism.

"I'm sure there's some sort of scientific explanation," she says. "But I call it magic."

Since 1998, through her nonprofit 4 Paws for Ability, Shirk has helped partner service dogs with people with a wide range of disabilities.

It was Shirk's own challenge in getting a service dog that led her to start 4 Paws.

In the late 1980s, while employed as a social worker in the field of mental retardation and autism, Shirk suddenly went into respiratory arrest. She was hospitalized off and on until 1992, when she was finally diagnosed with a rare neuromuscular disease.

Confined to a wheelchair and reliant on a respirator, Shirk set out to get a service dog so she could be more independent -- but agencies turned her down, saying she was too disabled for a dog to make a difference in her life.

Frustrated, Shirk eventually decided to obtain a dog on her own. She found Ben, a black German shepherd puppy that, with the help of a trainer, became her service dog. With Ben by her side, Shirk regained a sense of optimism and control over her life.

"He gave me a reason to get up in the morning," Shirk remembers. "I went from existing to living."

Knowing there must be others like her, Shirk started 4 Paws in her apartment to help people who've been told they're ineligible to get a service dog.

"We don't discriminate against anyone who has a need," she says.

Since many agencies have age restrictions, she now specializes in providing dogs to children. The dogs help kids with a variety of issues, from mobility problems to seizures, but from the start Shirk wanted to find ways to assist children with autism.

"I knew [autistic children] connected to animals," she remembers. "I knew that service dogs would be able to help."

She developed a program to train autism assistance dogs, and of the 319 dogs she's placed since 1998, nearly 70 percent have been partnered with autistic children.

"The biggest problem that's faced by families that have children with autism is isolation. They actually quit going out because they can't keep their child safe," says Shirk.

Shirk's service dogs are taught a variety of methods to help keep kids with autism safe. Since many children tend to wander away and get lost, 4 Paws uses a technique called "tethering," where the kids are tethered to their dogs while in public.

The parent -- who always holds the leash -- ultimately remains in control of both the dog and the child. Many dogs are even trained to track children who stray from home by following their scent.

Shirk says service dogs also give autistic children valuable emotional support. They're taught to intervene when a child is frustrated, reducing tantrums commonly known as "meltdowns." But Shirk believes one of the most important benefits is that the dogs are companions to kids who are often isolated.

"For our children with autism, their dog might be the only friend that they have."

Shirk's 4 Paws for Ability requires that families raise $12,000, on average, to pay for their service dog. Each dog is trained for the child's specific needs, and the entire process takes between nine and 18 months.

In the end, families come to Ohio to meet their dogs and receive training. For Shirk, seeing the kids bond with their dogs makes her efforts worthwhile.

Watch how Shirk partners service dogs with children with disabilities »

"I love to see their faces and know that I was a part of that," Shirk says. "It makes me feel good."