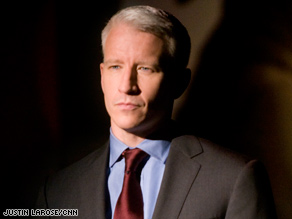 Anderson Cooper will host "CNN Heroes: An All-Star Tribute," to air on Thanksgiving at 9 p.m. ET.

"With the recent storms in Texas and southwest Louisiana, we have experienced a sudden drop in volunteers," said McCartney, whose St. Bernard Project helps Hurricane Katrina survivors rebuild their homes just outside New Orleans, Louisiana.

"While other areas need help, this recognition is letting the American people know that the New Orleans area still matters," McCartney said.

The diverse group of honorees includes a Cambodian activist who offers free schooling to children who work in Phnom Penh's trash dump; a Georgia prosthetist-orthotist who provides limbs and braces to hundreds of people in Mexico; and a Virginia woman who tapes video messages from incarcerated parents for their children.

"Our Top 10 CNN Heroes are proof that you don't need superpowers -- or millions of dollars -- to change the world and even save lives," Cooper said.

CNN launched its second annual global search for ordinary people accomplishing extraordinary deeds in February. The network has aired weekly CNN Hero profiles of those people, chosen from more than 3,700 nominations submitted by viewers in 75 countries.

A panel made up of world leaders and luminaries recognized for their own dedication to public service selected the Top 10. The Blue Ribbon Panel includes humanitarians such as Archbishop Emeritus Desmond Tutu, Jane Goodall, Kristi Yamaguchi and Deepak Chopra.

"What an incredible group of people and how difficult it was to select only 10," said Rabbi Shmuley Boteach, a panel member.

Archbishop Tutu added, "They all deserve to win. Thanks for saluting these remarkable human beings."

Each of this year's Top 10 CNN Heroes will receive $25,000 and will be honored at "CNN Heroes: An All-Star Tribute," airing from the Kodak Theatre in Hollywood on November 27.

Hosted by Cooper, the Thanksgiving night broadcast will culminate with the announcement of the CNN Hero of the Year, selected by the public in an online poll that began Thursday morning. iReport.com: Tell us about your hero

Continuing through November 19, viewers can log on to CNN.com/Heroes to participate in the poll. The person receiving the most votes will receive an additional $100,000.

Tad Agoglia, Houston, Texas --
Agoglia's First Response Team provides immediate help to areas hit by natural disasters. In a little over a year, he and his crew have aided thousands of victims at more than 15 sites across the United States, free of charge.

Carolyn LeCroy, Norfolk, Virginia --
After serving time in prison, LeCroy started The Messages Project to help children stay connected with their incarcerated parents. She and volunteer camera crews have taped roughly 3,000 messages from inmates to their children.

Anne Mahlum, Philadelphia, Pennsylvania --
On her daily morning jogs, Mahlum used to run past homeless men. Today, she's helping to transform lives by running with them, and others as part of her "Back On My Feet" program.

Liz McCartney, St. Bernard Parish, Louisiana --
McCartney moved to New Orleans to dedicate herself to helping Hurricane Katrina survivors move back into their homes. Her nonprofit St. Bernard Project has rebuilt the homes of more than 120 families for free.

Maria Ruiz, El Paso, Texas --
Several times a week, Ruiz crosses the border into Juarez, Mexico, to bring food, clothing and toys to hundreds of impoverished children and their families.

Marie Da Silva, Los Angeles, California --
Having lost 14 family members to AIDS, the Los Angeles nanny funds a school in her native Malawi -- where half a million children have been orphaned by the disease.

Viola Vaughn, Kaolack, Senegal --
The Detroit, Michigan, native moved to Senegal to retire. Instead, a group of failing schoolchildren asked her to help them pass their classes. Today, her "10,000 Girls" program is helping hundreds of girls succeed in school and run their own businesses.

"It is very rewarding to be able to honor these amazing, often unheralded individuals who are making a tremendous difference in their communities and beyond," Jim Walton, president of CNN Worldwide, said. "These stories of selfless achievement deserve to be told, and our multiple platforms around the world allow us to do that."