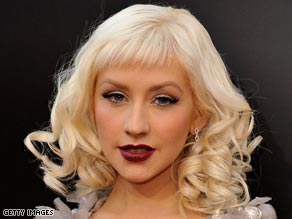 The show, taped before an audience of more than 2,000 at the Kodak Theatre in Hollywood, pays tribute to the top 10 CNN Heroes of 2008.

Liz McCartney, dedicated to helping survivors of Hurricane Katrina rebuild their homes, has been named the 2008 CNN Hero of the Year.

McCartney, of St. Bernard Parish, Louisiana, received the honor at Saturday night's taping of "CNN Heroes: An All-Star Tribute." The telecast airs at 9 p.m. ET/PT on Thanksgiving on the global networks of CNN.

McCartney, who will receive $100,000 to continue her work just outside New Orleans, was selected from among the top 10 CNN Heroes after six weeks of online voting at CNN.com. More than 1 million votes were cast.

"To the country and the world, I ask you to please join us," McCartney said. "Together we can continue to rebuild families' homes and lives. ... If you join us, we'll be unstoppable."

Watch a preview of the show, including Aguilera's performance »

Aguilera performed her hit single "Beautiful." Legend, backed by the world-renowned Agape Choir, brought the audience of more than 2,000 to their feet with his powerful call to personal action, "If You're Out There," from his just-released album, "Evolver." Keys sang "Superwoman," her tribute to women around the world, from her hit album "As I Am."

All three performances echoed the spirit of the CNN Heroes campaign, which salutes everyday people accomplishing extraordinary things in their communities and beyond.

Be inspired! Join Anderson Cooper for a celebration of the Top 10 CNN Heroes.
Thanksgiving night, 9 ET

"In this time of economic turmoil, it is such a relief to know that there are people like these heroes, people who care more for others than they do for themselves," Cooper said.

The top 10 CNN Heroes, chosen by a blue-ribbon panel from an initial pool of more than 3,700 viewer nominations, were each honored with a documentary tribute and introduced by a celebrity presenter. Each of the top 10 Heroes receives $25,000.

Watch a close-up look at the CNN Hero Award »

See photos of the presenters »

In addition, actor Hugh Jackman presented People magazine's 2008 Heroes Among Us award to six recipients honored by the magazine.

Award-winning producer-director Joel Gallen returned to executive produce this year's program. Among his credits, Gallen produced telethon events supporting victims of the September 11 terrorist attacks and Hurricane Katrina, winning an Emmy Award and a Peabody Award for "America: A Tribute to Heroes."

In addition to its airing on CNN, the second annual "CNN Heroes: An All-Star Tribute" will air simultaneously on CNN International and CNN en Español at 9 p.m. ET Thursday (0200 GMT Friday).

In alphabetical order, the top 10 CNN Heroes of 2008 as chosen by the blue-ribbon panel are:

Watch the members of the blue ribbon panel »

Tad Agoglia, Houston, Texas: Agoglia's First Response Team provides immediate help to areas hit by natural disasters. In a little over a year, he and his crew have helped thousands of victims at more than 15 sites across the United States, free of charge.

Carolyn LeCroy, Norfolk, Virginia: After serving time in prison, LeCroy started the Messages Project to help children stay connected with their incarcerated parents. She and volunteer camera crews have taped roughly 3,000 messages from inmates to their children.

Anne Mahlum, Philadelphia, Pennsylvania: On her daily morning jogs, Mahlum used to run past homeless men. Today, she's helping to transform lives by running with them, and others as part of her Back On My Feet program.

Liz McCartney, St. Bernard Parish, Louisiana: McCartney moved to New Orleans to dedicate herself to helping Hurricane Katrina survivors move back into their homes. Her nonprofit, St. Bernard Project, has rebuilt the homes of more than 120 families for free.

David Puckett, Savannah, Georgia: Puckett started PIPO Missions to bring ongoing prosthetic and orthotic care to those in need. Since November 2000, he has helped more than 420 people in southeastern Mexico, free of charge.

Marie Da Silva, Los Angeles, California: Having lost 14 family members to AIDS, the nanny funds a school in her native Malawi, where half a million children have been orphaned by the disease.

Viola Vaughn, Kaolack, Senegal: The Detroit, Michigan, native moved to Senegal to retire. Instead, a group of failing schoolchildren asked her to help them pass their classes. Today, her 10,000 Girls program is helping hundreds of girls succeed in school and run their own businesses.