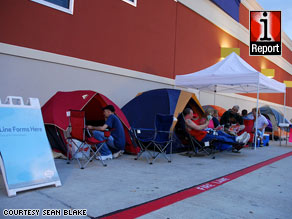 She was 30 minutes early at the sprawling store in suburban Kansas City, Missouri, where she had arrived to take advantage of Friday's 4 a.m. post-Thanksgiving clothing deals. But there were no tents, no campers, no eager shoppers waiting to spend their dollars.

Preuss said she expected to wait in a line to get service, but people were already inside, and the store was filled with frenzied shoppers. She captured video to document her experience.

"So apparently Wal-Mart did take pity on the poor souls standing outside in the cold and let people into the store early," Preuss said. "Here's how they handle it: They shrink-wrap all the goodies in plastic wrap, so all the good sale items are wrapped in black Saran wrap, and no one can touch them until 4 a.m."

As a self-described "Black Friday virgin," Preuss says, she has lots to learn about the proper technique for this holiday weekend ritual.

"I discovered that I was very unprepared for Black Friday, not dressed properly, as you need more padding to avoid all the shopping carts ramming into you," she said. "I feel like that song, 'Grandma Got Run Over by a Reindeer,' only the reindeer had a Wal-Mart sign on it."

She decided to see what the hype was about while visiting from Lake Delton, Wisconsin.

"I have three kids, and money is tight," she said. "I'm a single mom. This year, I decided I was going to give it a try and see if I could get some bargains."

Preuss said the lines of people searching for discounted merchandise said a lot about the shape of the economy. Many people were fighting over kids' clothes and other essentials, but she saw much less effort being expended on video games and TV sets. She said she came for the $4 kids' track suits and $8 winter coats. iReport.com: See footage of the shoppers packing the store

Inside the packed store, she began to realize she needed a new strategy to beat the crowds. She decided to grab a bunch of clothing from which to pick.

"I ditched the cart and went in with my bare hands," she said.
iReport.com: Huge crowd in Puerto Rico

Although Preuss got lucky and immediately entered the toasty store, others across the country were willing to wait in the freezing cold just to get merchandise.

Barbara Rademacher woke at 2 a.m. to see the shopping scene and found shoppers huddling outside a Best Buy in Fayetteville, Arkansas. Some had sleeping bags, blankets and winter wear. Chilly hands held lists of the items they planned to buy.

"Laptops! We have lists!" exclaimed excited shoppers waiting to get into the store.
iReport.com: Watch Arkansas customers wait in the cold

Rademacher watched a lengthy stream of people cram through the doors when the store opened.

"It's something fun to experience, because you can only do it once a year," one of the aspiring customers said to the camera. Rademacher headed for the nearby Kohl's and found a similar scene as massive queues of people started running into the store. iReport.com: Virginia shoppers join Santa at mall

"Whoa, look at all these people," Rademacher said. "I'm less worried about the economy than I might have been."

But even these determined shoppers had nothing on the tented campers spotted by Sean Blake of Houston, Texas, who found several temporary shelters set up outside a Best Buy store on Thursday. He said campers told him the first tents went up on Wednesday morning, two days ahead of the store's 5 a.m. sales deals. iReport.com: Retail campout for the holidays

Blake said the shoppers refer to themselves as the "Best Buy family" and have gotten together to wait in line for the past three years.

"They've become really close friends with each other because they've done this every year," Blake said. iReport.com: Vehicle blocked by overnight shoppers

Some customers spent almost the entirety of Thanksgiving in line, taking turns to get food or sneak a break from the close-knit tent city. Blake saw people with TV sets, car batteries, computers and other devices. He visited a different Best Buy store and found people playing an impromptu football game in the parking lot.

Eager shoppers made for many more strange sights Friday. Patrons camped out in the frozen-food aisle at a Meijer store in Louisville, Kentucky. iReport.com: Lawn chairs in aisle 9

While on a break during his grocery shift, Bryan Hoskins shot photos of the circuslike scene of customers taking free doughnuts as they sought HDTVs and video game consoles. He said some items sold out completely.

Not everyone could get what they wanted, as Jason Rathburn of Oak Ridge, Tennessee, found. iReport.com: Wal-Mart packed to the gills

"It was a sea of people," said Rathburn, who hoped to buy a Nintendo Wii game system but went home empty-handed. He wasn't impressed by the behavior of fellow customers.

He said a woman accidentally bumped his back as she tried to compete with him while he examined $1.50 towels. He also said he watched as a customer swooped in to take a 42-inch TV and the unattended cart in which it was sitting.

"I'm guessing that the spirit of giving for Christmas starts tomorrow," he said.