(Mental Floss) -- We all know about the Confederate states leaving the Union. But that was far from the only secessionist movement in American history. Here are some rebellious regions you won't find in too many history books. 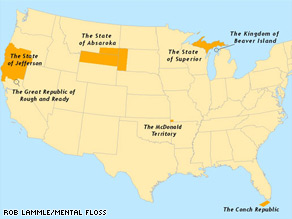 This map shows some rebellious regions that have tried to seceed from the United States.

1. The Kingdom of Beaver Island

Beaver Island, a small island in Lake Michigan, became the home of Mormon leader James Strang and his followers -- called Strangites -- in 1848. Two years later, Strang declared himself king of the church -- complete with crown, scepter, robe, and a harem of 15 wives.

However, most of the island's inhabitants were his followers, so he essentially became King of Beaver Island. The power got to his head, and he began forcing his rule onto the non-believers, causing some violence between the two factions.

In 1856, the USS Michigan pulled into the harbor and invited Strang aboard. As he was walking towards the ship, he was shot in the back by disgruntled followers, who then ran up the gangplank and escaped. Adding to the mysterious circumstances, the assassins were set ashore on nearby Mackinac Island and never charged for their crime.

Shortly after the assassination, angry mobs from surrounding islands eventually forced the Strangites from their homes, thus ending the short-lived Kingdom of Beaver Island.

2. The state of Superior

Concern over a perceived lack of interest from the Michigan state government, the people of the Upper Peninsula (U.P.), affectionately known as "Yoopers," have been trying to secede and form the State of Superior since as far back as 1897.

The movement gained momentum after 1957 when a bridge connecting the U.P. region to Lower Michigan made it easier for southern "Trolls" (people who live "below the bridge") and Yoopers to mingle. This animosity continued into the mid-1980s, when 20,000 signatures were collected and submitted to the state for a secession request.

However, the number was shy of the 36,000 required, and the request subsequently denied. The secessionist drive lives on today, as numerous grassroots organizations are trying to muster support for another official attempt at an independent U.P. Until that day comes, though, the Yoopers and Trolls will just have to try to get along.

3. The Great Republic of Rough and Ready

Rough and Ready, California, was a mining town founded in 1849 by the Rough and Ready Company of Wisconsin. As the town's population rapidly exploded to 3,000, lawlessness was on the rise -- and the U.S. government was not much help squelching the rampant crime. Mental Floss: Three controversial maps

Additionally, a new federal tax on mining operations added fuel to the region's civil unrest. Seeing little support from Washington, on April 7, 1850, the townspeople voted to secede from the Union.

But just three months later, as the Fourth of July approached, The Great Republic of Rough and Ready wanted to have a celebration (which seems odd considering they were no longer technically Americans). When nearby Nevada City wouldn't sell liquor to "foreign miners," it was decided that maybe America wasn't so bad after all. The townspeople voted themselves back into the Union on the very same day and the party went off as planned.

In the early-1980s, the U.S. Border Patrol set up a checkpoint at the entrance to the Florida Keys in an effort to stop illegal drugs and immigrants. The time to check everyone's identification at the checkpoint resulted in a 20-mile traffic jam that turned tourists away, thus damaging the economy in the Keys.

After numerous legal attempts to have the checkpoint removed, on April 23, 1982, Key West mayor Dennis Wardlow declared the Florida Keys were seceding from the Union.

Moments later, now-Prime Minister Wardlow symbolically declared war on the U.S. by breaking a stale piece of Cuban bread over the head of a man dressed in a U.S. Navy uniform. One minute later, Wardlow turned to the Admiral in charge of the U.S. Naval Base at Key West and surrendered, thus ending the Conch Republic's Civil Rebellion. He then immediately asked for $1 billion in federal aid to help rebuild his war-torn nation's economy.

While officially the Republic only existed for one minute, the tongue-in-cheek spirit of the rebellion lives on. Today you can buy Conch Republic citizen and diplomatic passports (both of which have been used for international travel, though they are not intended to be official documents) and even an official flag of the republic (complete with the awesome motto, "We seceded where others failed"). The community has even minted a series of limited edition one-conch dollar coins that can be used as legal tender while in the Keys.

5. The State of Absaroka

Feeling that the Democratic southern half of Wyoming was not working in conjunction with the rest of the state, a secessionist movement was launched by northern Republicans in 1939 to create a new state that would better serve its more conservative population.

This state, Absaroka -- so named after the nearby mountain range -- was to be made up of northern Wyoming, southeast Montana, and the western region of South Dakota. While the secessionist movement was never very large or pursued through legal channels, that didn't stop A. R. Swickard, the street commissioner of Sheridan, Wyoming, from appointing himself governor of the "state."

The movement went so far as to press Absaroka license plates and crown a Miss Absaroka beauty queen. Absaroka could even brag about a visit from a foreign dignitary, King Haakon VII of Norway (though he was officially visiting Wyoming and just happened to be in Absaroka).

Despite all of the hoopla, the state never came to be, and now, so many years later, the intent of the secessionist movement is in question. Some believe there was a genuine attempt to create a new state, while others say it was just a fun way for cowboys to distract themselves during tough economic times.

6. The State of Jefferson

Northern California and southern Oregon have been trying to merge since 1852. The attempts have been met with mixed results, though the "State of Jefferson" movement of 1941 came closest to making it happen.

The region felt it was being ignored by their respective state legislatures, so in response the people created the "State of Jefferson Citizen's Committee" to explore the possibilities of secession. The group began stopping cars on Highway 99 to hand out the state's "Proclamation of Independence," a pamphlet outlining the grievances they held and the solutions they proposed.

To help rally their cause, they developed a state flag made up of a gold miner's pan with two black X's inside, representing the double-cross they felt the Oregon and California state governments had pulled. Mental Floss: Thomas Jefferson

On December 4, 1941, Judge John Childs was elected governor of Jefferson in the state's temporary capital of Yreka, California. The event was filmed by numerous newsreel companies who were set to air the footage during the week of December 8.

History had other plans, as the Japanese bombed Pearl Harbor the day before the big premiere. Driven by a sense of national obligation, the Jefferson secession was put aside and never really regained momentum. While the official movement might have died out, the residents of this region still hold the concept in their hearts, with many identifying themselves even today as the population of the great state of Jefferson.

Noel, Missouri, located in McDonald County in the far southwest corner of the Show Me State, has been a popular tourist destination for many years. Therefore, when the Missouri State Highway Commission left Noel off their annual "Family Vacationland" map in 1961, the region was not happy pleased.

To display their dissatisfaction, McDonald County drew up papers of secession and presented them to the state legislature, declaring itself the independent McDonald Territory. The county went so far as to elect officials, form a territorial militia, and even printed up visas that were issued to visitors so they could travel throughout the territory.

Perhaps the most lasting impression were the thousands of McDonald Territory stamps that were printed and sold throughout the area. While most agree that the secession was done purely for publicity, the state of Missouri wasn't necessarily happy about the type of publicity it was garnering.

And here's one more secessionist movement that's been in the news this year. From 1995 to 2002 (except for a few months in 2000), Alaska's First Dude Todd Palin was a member of the Alaska Independence Party. Fellow Mental Floss writer Jeff Fleischer has the story on the AIP:

For decades, a well-organized separatist movement has campaigned to turn America's largest state into its own nation. The bitterness dates back to 1958, when Alaska's citizens were given a simple yes-or-no vote on statehood.

Many Alaskans felt they were denied more options on the issue, prompting a land developer named Joe Vogler to organize a re-vote that would offer Alaskans four possibilities -- remain a territory, become a state, take commonwealth status, or become a separate nation.

Using the vote as his platform, Vogler ran for governor in 1974 -- and soon made a habit of it. With colorful slogans such as, "I'm an Alaskan, not an American. I've got no use for America or her damned institutions," Vogler spearheaded the Alaskan Independence Party (AIP), and his campaign has twice topped 5 percent of the vote. Mental Floss: Nine modern-day independence movements

More surprisingly, former U.S. interior secretary Wally Hickel got elected governor on the AIP ticket in 1990. Unfortunately for the party, Hickel only ran on the ticket because he lost the Republican primary. Never a supporter of the plebiscite idea, Hickel left the AIP and rejoined the Republicans in 1994.

Today, the AIP continues to draw about 4 percent of voters statewide. And in 2006, Alaska took part in the first-ever North American Secessionist Convention, joining other groups from Vermont, Hawaii, and the South. As for Vogler, he was murdered in 1993 -- reportedly the result of an argument over a business deal.

On a brighter note, honoring his wish to never be buried in U.S. soil, Vogler was laid to rest in Canada's Yukon Territory.

All About Upper Peninsula of Michigan • Oregon