Admission questions to Oxford, Cambridge called 'out there'

OXFORD, England (CNN) -- You might expect Oxford and Cambridge universities to ask prospective students to compare the works of Chaucer to Boccaccio or to explain the theory of relativity. 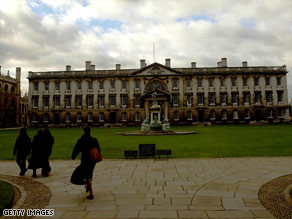 Cambridge students may have to field questions in the application process that would baffle some observers.

Instead, Oxford wants to know: "Would you rather be a novel or a poem?"

Cambridge asks applicants: "What would you do if you were a magpie?"

The idea, say administrators at the two ultra-prestigious schools in England, is to see how well prospective students can think, not just how much they know.

"What we're trying to do is move students out of their comfort zone," said Mike Nicholson, Oxford University admissions director. "Many students will have a body of knowledge, and they may be expected to be trusted on that in the interview. What we want to do is take them beyond that point and get them to start thinking for themselves."

See examples of the application questions »

Tutoring company Oxbridge Applications -- founded by Oxford graduates in 1999 -- says 68 percent of the 35,000 clients it has helped are state-funded students. It costs $300 for a day of mock interviews or $1,500 for a full weekend course. Oxbridge says 47 percent of its clients get into one of the elite colleges. The overall success rate for all applicants to the two schools -- commonly referred to as Oxbridge -- is 24 percent, the tutoring company says.

"At Oxbridge Applications, we have a network of 500 former tutors and former admissions tutors as well," said company founder James Uffindell. "And we take the people that have been there and done it and help supply that information back to the people that want to go there."

Still, some of the questions seem a bit odd to the casual observer.

Watch people on the street react to some brainteasers »

"It's totally out there really," said one passer-by interviewed on the street. "Are they on drugs, these people in Cambridge?"

Some of the questions seem downright sinister: "How would you poison someone without the police finding out?" Cambridge asks.

Others are perhaps downright practical: "Instead of politicians, why don't we let the managers of Ikea run the country?"